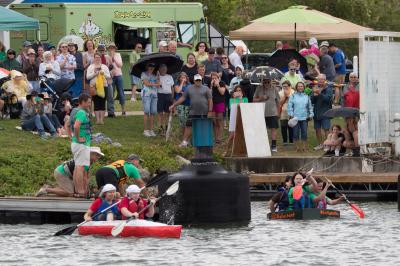 Don't give up the shipping materials — they make for wonderful, whimsical watercraft. Well, ideally.

The cardboard boat regatta originated in 1962 with the Design Department at Southern Illinois University, where the senior class was charged with constructing cardboard vessels that could survive a voyage of 100 feet without getting their single passengers wet. Fast-forward half a century later and similar events have surfaced all over the world, including in Erie, where the Bayfront Maritime Center (BMC) has hosted its Cardboard Boat Regatta since 2010.

"Cardboard boat" is a bit of a misnomer, according to Rich Eisenberg, executive director of the BMC. "The correct term is 'corrugated fiberboard.'"

But no one has time for all those extra syllables, not when there are calculations to be made. The regatta perfectly jibes with the mission for (Science, Technology, Engineering, and Math) learning and luring people to the waterfront. "Somewhere along the way, Erie lost its connection with the water," said Eisenberg, in part implicating the environmental ramifications of our industrial past. While the ecosystem is not in mint condition, it has improved markedly in the ensuing decades. Eisenberg says it's time for us to return to Erie's reason for being. "What we have here shouldn't be just for yacht club people; it should be for everyone."

While not quite everyone has shown for the BMC's Cardboard Boat Regattas over the years, it's not uncommon for hundreds to line the East Canal Basin to watch the follies unfold just outside the BMC boat shop. The key to avoiding folly, of course, is to design a craft that takes to the water without taking on water. It may seem like a challenge to construct a durable hull from only corrugated fiberboard ("cardboard" actually refers to the thin material used for cereal and Kleenex boxes), tape (such as or Gorilla tape), glue, and paint. However, three of the boats on display in the shop— Black Mamba, Lono, and Lightning Bolt — have endured for multiple regattas.

There are various approaches to building a boat, but the aforementioned vessels have prevailed by being well-sealed (painting the inside is crucial) and well-shaped (a longer, sleeker boat will tend to go faster). The curvature or angling of the bottom can have a huge effect on stability. Lono, last year's Adult Division winner, has a flat bottom and great straight-line speed but is slow to turn. Lightning Bolt, last year's Youth Division winner, has angled sides and a gentle V-shaped bottom, which aid with cornering ability (be warned: a V-shape that is too deep will rock too much and capsize). But even if you design a dud, do not despair — you may be in line for the "Most Dramatic Sinking" award (last year that dubious honor went to The SS Reluctant, fashioned from an octagonal Wegmans watermelon box).

Eisenberg suggests building a small-scale model of your intended design and testing it in a sink or bathtub before being unpleasantly surprised when you climb aboard the real deal. Trophies will be awarded to the fastest finishers in each division (Youth, Teen, Adult, and Mixed Ages), with special distinctions for "Most Creative" and "Crowd Favorite" (in addition to "Most Dramatic Sinking"). A record eighteen teams have already pre-enrolled (there is no limit to team size, just be aware your boat has to support the extra weight!), but most show up the day of. Stick around for the slalom race (new this year) and the traditional "redemption race" to cap off the festivities. In the meantime, relish items from the Cluk Truk, Sticks N' Bricks, and Northern Scoop food trucks. You know, whatever floats your boat. — Matt Swanseger

by Katelyn Kruszewski7 hours ago
The theatre and community arts center hosts a free two-day event of theatre, music, poetry, and more