Sacred Paws // Run Around the Sun

by Nick Warren
View ProfileTwitterInstagramRSS Feed
June 5, 2019 at 11:00 AM 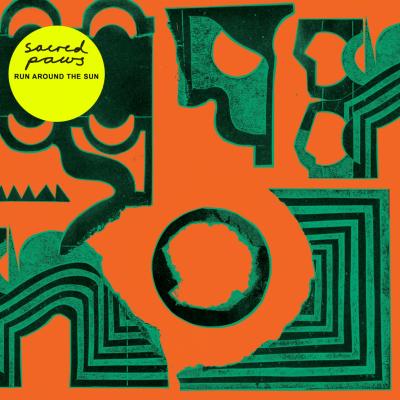 A bright and optimistic sounding record, the aptly titled Run Around the Sun comes at just the right time, a perfect indie album for summer days. The sophomore album from the Scottish duo of guitarist Rachel Aggs and drummer Eilidh Rodgers finds the two arriving at many of the same conclusions they did in their debut Strike a Match, but with a more hopeful bent. Aggs has a captivating style of playing — rhythmic, technically adept, and always moving. She is also a member of the bands Shopping and Trash Kit, her distinctive guitarwork almost immediately recognizable. A syncopated blend of the African Highlife style and post-punk ideals, it's a percussive flavor reminiscent of Minus the Bear, The Raincoats, Sleater-Kinney, and Talking Heads — influences that, while disparate, come together. Clean brass sections dot the album in tracks like "Almost It," one of many danceable upbeat grooves. The major-scale tonality coupled with the consistent tempo of each track reads as a declaration of purpose, the intent to please. While the album may not be wholly innovative, especially compared against Aggs' other works, it's worth visiting, a welcoming album that is bound to put a smile on your face. — Nick Warren

Run Around the SunSacred Paws