by Alex Bieler
View ProfileFacebookTwitterInstagramGoogle+RSS Feed
October 29, 2014 at 7:20 AM 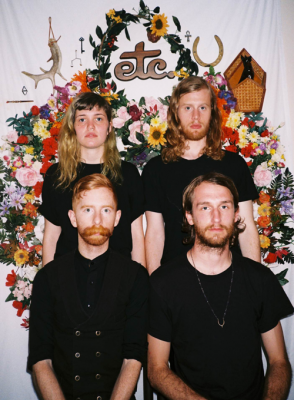 Zac Little (bottom left) and his bandmates push the boundaries of traditional folk-rock on their latest album.

After the success of Mumford and Sons, the indie folk scene seemed full of eager groups chomping at the proverbial bit for their chance to fill the market's new desire for bands with banjos, dulcimers, and anything else Appalachia. Saintseneca rose above that, largely because the Columbus-based folk-rockers were not only good, but also a little different than your standard banjo stompers.

On their latest album Dark Arc, the members of Saintseneca employ a wide variety of shifting instruments and contagious folk experimentations that flow between fragility and punkish strength. Needless to say, it's good stuff. I talked to Saintseneca frontman Zac Little betweens tours about Dark Arc, their penchant for wooden stomp boxes, and what it was like to stop by NPR for a Tiny Desk Concert.

Alex Bieler: You wrapped up a tour in July, so what are you working on at the moment?

Zac Little: I have all of the songs for the next record, but I've been working on arrangements. Ideally, that will be something we begin to focus on before too long, but I still think Dark Arc deserves its full attention, so we're still giving that time.

AB: Are you the type of person who doesn't really take breaks between work?

ZL: I just write all of the time. I don't really take breaks. I think it's nice to have a backlog of songs and then you're in the position where you can edit down when it comes to making a record.

AB: How has life been since the release of Dark Arc?

ZL: Good, it's been busy. I certainly feel fortunate to be busy during these kinds of things. We've been focusing a lot of time and energy on touring. Even leading up to the record, we were touring quite a bit just to build some interest and try to put a lot of support behind it, and that's been fun.

AB: How long has Saintseneca had its current lineup?

ZL: The lineup changes from tour to tour, so even in the time that we've put out the record, we've had a different lineup on various shows. Everyone's joined at different points, so it's difficult to say. The most recent addition was Matt [O'Conke], our drummer. He started playing with us after we recorded in Omaha.

AB: Is he an official band member or a touring member?

ZL: He's a member as much as anybody is. It's one of those things where it's a pretty nebulous group, but I think that everybody is excited and committed to doing it. It's not like anybody is held to that, because everybody has their own projects and lives, so it's flexible.

AB: Yeah, I know that Steve [Ciolek] is getting ready to play with his other band The Sidekicks. How is that when it comes to arranging tours?

ZL: We try to work around schedules and make it work, but if someone can't do it, that's fine. We've always been capable of rearranging the songs and just trying to find an interesting way to present a different lineup. It can be fun to do that too, like a different challenge.

AB: That's not too surprising, seeing as how the band members always switch around instruments when you're all playing. Is that a product of the shifting lineup or does the instrument swap come from something else?

ZL: No, that probably has more to do with writing, because I'll write on a bunch of different instruments. If I write a song on bass, a lot of times I'm like "well, I want to play the bass part," so then everybody sort of shuffles around, but then I'll write a song on guitar and for our live arrangement I'll end up playing dulcimer or something.

AB: I saw that in July, Saintseneca had a Tiny Desk Concert session on NPR. What was that experience like?

ZL: That was really fun, actually. It was a hectic day because we had done a session right before that and had driven to Washington, D.C. the night before, so we didn't get in there until 4 a.m. and we had to get up at 10 to do sessions. The people at Tiny Desk were really nice and do a good job of making it pretty spontaneous and laid-back. But at the same time, they're real pros, so you feel like you're in safe hands in terms of getting a decent sound. It was really fun. It was something I had hoped to do for a really long time, so it was cool to finally be able to do it.

AB: Brian Graham, one of the editors at the Reader, told me I had to ask you what [All Songs Considered host] Bob Boilen was like.

ZL: He was cool. He was very friendly, very personable. He took us around, showed us the office. Really approachable.

AB: I read in the description of your Tiny Desk Concert that one of your stomp boxes that you use while you play was broken.

ZL: Yeah, I had stomped a hole in it the night before.

AB: How often does that happen?

ZL: It happened three times while on the last tour. I need to use better wood.

AB: When did you start incorporating stomp boxes into your music?

ZL: Well, we didn't have drums for a long time, so that was really our bass drum for a period of time. We got to a point where there'd be inconsistencies in the venues we were at, so you'd never know if we would be playing on a stage where it would be sweet if you stomped on it, but then other times you'd be playing on a cinder block floor and you'd be killing your foot and not getting any sound out of it. I decided to eliminate that variable and create our own.

AB: What do you do when they break?

ZL: I put a piece of wood over the top of it, just screwed it on top. It doesn't happen all of the time, just on that one particular tour. We build the stomp boxes to be specific to the vehicle we were traveling in so that they would fit just so and I used thinner plywood, which was a mistake.

AB: One thing I love about Saintseneca's music is your vocal styling on the record, where it just floats along with the songs. Is that something you developed early on?

ZL: Probably. I don't really try to do any particular thing; it's just what feels natural. Maybe it takes a while to figure out what that is. I think early on when you're singing and writing songs, you have the tendency to emulate people you really like and then eventually you settle into your own voice. At this point, I try to push myself and do new things, but I guess it's just a pretty natural process.

AB: Similar to your vocals, you have a very fluid lyrical style. On Dark Arc, there are even some fairly violent lines like "Right I pluck my right eye right out" on "Only the Young Die Good." Where does your writing process come from?

ZL: I don't know; it comes from all kinds of things. [The violence] was something that just thematically made sense for the record, something that was just over the top, like darker imagery. I feel like it's counteractive in some ways, too, to have extremes.

AB: Do you typically have ideas for when you write songs or does it just come naturally?

ZL: It depends. I have many different approaches that I'll take. Sometimes I'll figure out what a song is… I hesitate to even say "about," because for me, I try not to write songs that are "about" or it's "like this" or something. Ideally, the song itself is the best articulation of a particular thought or sentiment. Sometimes, it's a sentiment or a feeling or an idea that can be ambiguous and then it takes time and I realize what a song is about or related to later. Other times, I'll have really specific inspiration where I'm meditating on a particular thing.

AB: That reminds me about how James Murphy from LCD Soundsystem wouldn't write about specific things; instead, he'd try to capture certain emotions and try to convey that.

ZL: Yeah, that's probably more along the lines of what I do. It just depends. Sometimes expressing something in a way that is less conventional seems like a more concise way to put it for me.

Alex Bieler can be contacted at aBieler@ErieReader.com, and you can follow him on Twitter @Catch20Q.He also strongly suggests you go listen to Saintseneca's latest album Dark Arc if you haven't already.