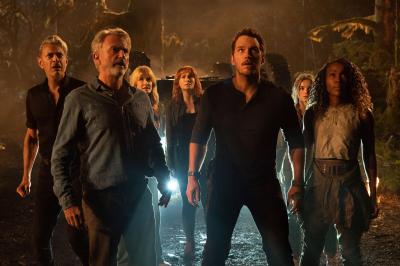 Rating: One star out of Five

At the climax of Jurassic World: Fallen Kingdom, it was discovered that evil businessmen were mixing dinosaur and human DNA and the genetically engineered dinos of Isla Nublar had escaped to the mainland and were now running freely all over the world! Sounds like a set-up that would make the next film in the so-called "Jurassic Saga" some kind of epic all-out war between man and prehistoric beast, right? Instead we get some kind of bland corporate espionage story with the fact that there are dinosaurs loose all over the world being treated as little more than an afterthought. This is just one of the many baffling decisions that make up Jurassic World: Dominion, one of the messiest, most convoluted blockbusters I've ever seen, and I've seen The Rise of Skywalker. Times sure have changed since Steven Spielberg's relatively simple 1993 sci-fi thriller kicked off this franchise.

Four years after the dinosaurs have entered the mainland, Owen Grady (Chris Pratt) and Claire Dearing (Bryce Dallas Howard) are living off the grid with their adopted daughter, Maisie (Isabella Sermon). But they are called to action when Maisie is kidnapped by shady figures due to her unique parentage. Meanwhile, genetically engineered giant locusts are causing a food crisis and it's up to some familiar faces (back only to stroke fan service) to get to the bottom of who is behind their creation.

The plot is an absolute disaster, feeling like five different stories at once with characters who jump into and out of scenes whenever the action calls for them. This is tragic because there is a central idea (dinosaurs running around modern civilization) that is intriguing but it gets pushed aside for the locust subplot. Wouldn't the dinosaurs be enough of an environmental threat (these animals would completely wreck the world's ecosystems)? As for the dinos themselves; they've gone from terrifying representations of the chaos of nature into mild nuisances at best, stray puppies at worst.

Every time I think this series has reached its low point, it somehow gets worse but hopefully this installment will be enough to make the franchise extinct.