by Nick Warren
View ProfileTwitterInstagramRSS Feed
May 4, 2022 at 4:30 PM 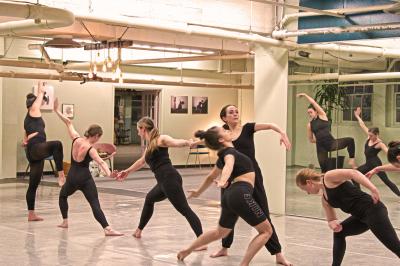 The members of Seiche Dance Collective have been hard at work in preparation for the opening of "Proximal Connections," their latest performance slated to run for one weekend only at the Blasco Library's H.O. Hirt Auditorium.

Established in 2019, Seiche (pronounced "saysh") brought together talented, trained dancers of various professions, for an adult collective (Four of the company's nine artists are past 40 Under 40 honorees for their work outside of Seiche).

Soon after their formation, however, contact wasn't an option. Though they would eventually regroup, the theme of "Proximal Connections" began to take shape. Artist Director Danielle Kaiser remembers a moment last year between two dancers "where they were meant to grab hands, and they couldn't reach each other. My company manager and I looked at each other and it was this awesome moment, kind of a vibration on stage. So that's where it started."

Kaiser noted that "It's centered on the idea of the human desire to have a connection. But then it expanded into investigating connections of all different types. As a company, we like to experiment with classical ballet in combination with contemporary."

Describing the piece's narrative, Kaiser explained that they are "investigating the connection of physical touch. So the piece goes from not even making eye contact with each other to being full contact improv with contact partner work."

One performance in two acts, "Proximal Connections" showcases captivating choreography that's as entrancing as it is breathtaking. This choreography is done entirely in-house, by the members of the collective itself.

The first act is entirely composed of one section, "Classical Divergence" set to "Serenade for Strings in C major, Op. 48" by Pyotr Ilyich Tchaikovsky. The second act is broken up into five sections, capped off by the "Budding Exuberance" with "Spring 1, Autumn 3, Spring 3" by Max Richter as a backdrop.

Watching the nine company artists perform quickly makes you realize the physicality and athleticism these dancers exude, coupled with the grace and fluidity that contemporary dance demands. — Nick Warren