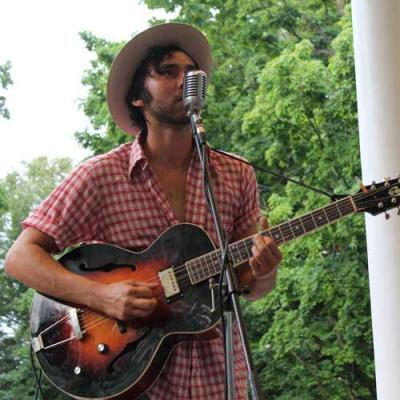 A drenching rain started coming down not too long after Shakey Graves arrived, set himself up, and started playing inside downtown Meadville's Diamond Park gazebo.

But I didn't see anyone who'd come to see what was happening there get up to leave. Seemed like more people were arriving, if anything.

"Keep going!" a lady on the lawn yelled up to the Austin singer/songwriter/one-man band amidst the rain.

"Will do," he said in polite reply. And then did.

When the rain began pouring down even harder, Graves took another pause. He then cordially invited everyone there to crowd into the park's gazebo with him, and after most everyone did, he turned himself, his guitar, and his kickdrum around and played on.

Tucked right in with that intimate crowd, it seemed Graves' energy was naturally built-up, blasting out to appreciative ears, and, by the end, leaving him righteously exhausted-looking, almost punch-drunk from what he does and how he does it.

And what this Shakey Graves does, well, it's tough to label; the folks at NPR Music used words like "unclassifiably original" – and "frighteningly good" – to describe his sound and vibe.

It's most definitely something to behold – this wiry young Texan laying raw, world-wise-and-weary narratives out over contrasted sparse-and-explosive flatpick guitar work, at the same time stomping out driving rhythms on a kickdrum he's fashioned from an old pale-yellow suitcase.

"My music is ... uh ... It's just a loud songwriting delivery system – I think," the 25-year-old Alejandro Rose-Garcia told his hometown's Austin Monthly earlier this year.

In one YouTube-posted video – a 2012 throw-together performance of his tune "Late July," taped at the bottom of an East Austin storm basin – Rose-Garcia talked about how the name came about on one eventful night at a Texas music festival:

"This guy came to [Rose-Garcia and his friends'] campsite, and I guess he was tripping on acid or something. He was just ranting," he said, explaining how the man was trying to make everyone around as convinced as he was that the big, warm, old beer he was slurping away at was actually a very-fine, smooth-as-silk whiskey to be enjoyed and appreciated by all.

And, quite cryptically, "the last thing we heard him say," before rambling off on his weird way, said Rose-Garcia, "was 'Spooky Wagons.'"

Right after that step into (or step onto from) the deeply cerebral, Rose-Garcia said, he and his buddies started assigning each other spirit-guide names along those lines – and, after he pulled out his guitar, it turned out 'Shakey Graves' was there to stay.

It was that night, he said, that he "played for the first time in a long time" in front of people listening, and, "It was great. It was a musical explosion."

And when people came up to say, "What's yer name, man?" and/or just started calling him Shakey, he "decided to stick with it," he said.

And Rose-Garcia – who's also a professional actor (he had a recurring role on the Texas-based hit "Friday Night Lights") – wrote in a December 2012 tumblr.com journal entry that the musical experiment that's become Shakey Graves had, up until the last few years, basically been "a weird pile of burned CDs in some treasure drawer covered in drawings and full of hissy bizarre home recordings...in various states and of different qualities that (had) gone unheard."

These days, though, those words and music are getting out – through dogged cross-country touring (that includes major festivals like the Montreal Jazz Festival and opening slots for big names like Robert Plant and Old Crow Medicine Show), album and EP releases, fan-anticipated (and fan-making) online postings of live and rare performances, and plenty of critical acclaim – and people are paying attention.

To my ears, Shakey Graves' sound and presence brings to mind a slew of elements, something sort of like a low-polish (in a good way) musical lovechild of early, "Another Side Of"-era Bob Dylan and country-vibed Jack White, born and raised and sharpened around some hip, bluesy Lone Star State honky-tonk (and maybe spending some lazy days hanging out and talking universal strife with a young Phil Ochs). But that description only tells a bit of what you hear coming out of that "loud songwriting delivery system." There are more and deeper roots – the stuff of earliest American blues and folk – coming down and out through Graves.

"See his show," critics at Folk Hive wrote. "Travel to Austin if you must."

Those who took the opportunity to check Shakey Graves out when he played that cozy free show in Meadville on Thursday, June 27 – the kickoff for the ongoing Meadville Downtown Summer Concert Series – won't be needing to do that.

But, if that were the only option, it's very likely some may want just to see him again. And for those around here who didn't make it out to Meadville that night, we'd suggest listening if and when you can.

Once you do, seeing him for yourself just might be worth making a considerably longer trip.