Pulling few punches, a new collaborative video offers a realistic look at our city's future. Entitled "This is Our Erie," the video was produced as an honest response to a national statement. 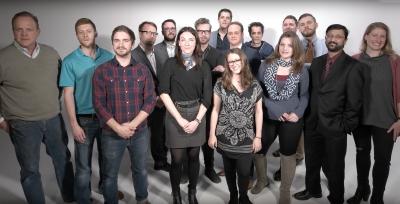 Pulling few punches, a new collaborative video offers a realistic look at our city's future. Entitled "This is Our Erie," the video was produced as an honest response to a national statement.

Within a relatively short time, several videos have been produced using Erie as a focus. Painting the narrative of a rust belt city on the decline, one video from CBSNews.com declared Erie to be a "sinking ship."

Needless to say, many Erie residents sprung to the defense of their hometown. Ferki Ferati, Vice President and Executive Director of the Jefferson Educational Society detailed the inspiration for the video, explaining that "the idea came once we saw the narrative that CBS news was trying to portray Erie, we thought that that Narrative of James Fallows and The Atlantic was the more realistic narrative of Erie, Pennsylvania."

Fallows' well-researched vision of the city is a more cautiously optimistic one. Along with the members of the team, Ferati shares that vision. "There are some exciting things happening in our town. The times are changing. We are not the manufacturing town that we always thought we were going to be. We have come into the 21st century. There are amazing things going on in our town, like Erie Insurance, LECOM, the innovation district, Velocity Net, and the list goes on and on. We are all trying to basically tell a story which is more realistic of the city of the Erie region which portrays Erie as a very diverse place, the importance of the refugee population, the importance of advanced manufacturing, the importance of the development of new industries."

David Hunter, Managing Partner of Epic Web Studios "We didn't want a tourism video. This is a rebuttal to what's happened on the national stage. The [CBS video] was a narrative, so it needed a narrative in response."

The video, narrated by local emcee Charles Brown (better known as C. Brown), begins with a stark, realistic tone. Discussing Erie's history as a manufacturing town, the film builds a framework of hard work and perseverance. Hunter reasoned "that's why this video was made the way it was. It starts out talking about that history, those 'battered knuckles and calloused hands,' and then it pivots and the tone of the entire narrative changes."

Showcasing a diverse roster of faces from around the city, the video transitions to an inclusive, hopeful message.

Local filmmake John C. Lyons outlined the arc of the narrative, confessing that "the point is, we're struggling. we have our problems, but is that the end of our story? Is that our only story? Is that the story that we should be putting out to the world, because really the issue that Erie has is marketing issue, and a mindset issue."

"Our character is one of struggle," Lyons explained. "That informs us and lays our foundation, that we're stronger than other people because we persevere."

A true collaborative effort, the film was produced by Lyons, of Lyon's Den Productions in association with MenajErie Studios. The film was executive produced by Hunter, Ferati, and Perry Wood, Executive Director of the Erie County Gaming Revenue Authority.

The team of 20 features a veritable who's who of local creators. Working in tandem the group produced the short film in a manner of weeks, from concept to creation.

Filmmaker Jessica Yochim of MenajErie Studios elaborated that "the idea is to shed light inside the businesses and positive things going on day-to-day in Erie. We had less than a month to complete the project and included over 75 businesses. We decided on #OurErie because Erie is strongest when people work together."

Lyons summarized that the group's "goal is that this would serve as our unified statement, and hopefully an introduction to a more in depth series that will really drill down and be more focused and take more time with these places, as a web series."

The video itself encourages a dialogue. In the end credits, it reads to "Add your voice" by using the hashtags #myerie and #ourerie, and by emailing responses to OurErie@gmail.com.