by Nick Warren
View ProfileTwitterInstagramRSS Feed
May 9, 2018 at 1:15 PM 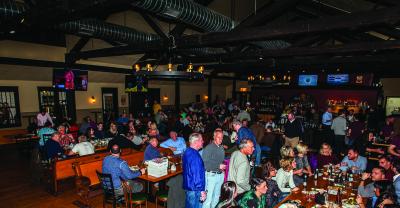 Members of The Lake Erie Ale Trail will be taking part in a national celebration known as American Craft Beer Week. Championing independent craft brewers, there will be a plethora of interesting events going on for the discerning drinker — and of course, their designated driver.

All week long, local breweries will run promotions and specials, including the first pint night of 2018 and the season opening of Bird courtesy of Five & 20 Spirits & Brewing on Thursday, and "Cellar Night" at the Brewerie at Union Station on Friday. North East's Arundel Cellars and Brewing will debut their new smooth black IPA, "Black Sheep," and host SASS Acoustics on Saturday evening, starting at 6 p.m., and Mike and Marie

Miller, along with Harry Parker on Sunday afternoon beginning at 1.p.m.
Going the distance, Erie Ale Works will host its 2nd annual 0.01 k, or a run that translates into just under 33 feet. It should be a photo finish for the charity event for the Humane Society of Northwest Pennsylvania.

The keystone event of the week will be the "Beer Coaster" at Waldameer Park. Starting at 4 p.m. on Saturday, May 19, the much-loved amusement park will treat guests to pairings of craft beer and gourmet hot dogs.