by Charles Brown
View ProfileFacebookTwitterInstagramRSS Feed
October 12, 2016 at 11:45 AM 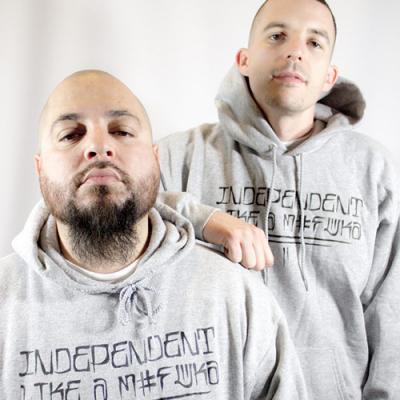 Within the hip hop realm, there's a constant battle between the mainstream and underground circuit. One keeps its door shut, while the other one undoubtedly goes around it creating opportunities for itself. Take California's duo I.L.A.M. (Independent Like A M#fuka), for instance, which united back in 2011 to defeat the odds of the contemporary rap world. Trey C (Sebastopol, California) and Playa Rae (San Jose, California) joined forces to push not only their music, but also their brand – independently, through their label Monstaville Music. After releasing an EP under their proud moniker, the two have been on a rebellion penning raw lyrics that deliver golden-era nostalgia. You can hear their authenticity as they intend to overthrow conformity, or at least make a place beside it. With straight-to-the-point anthems like "Numbers," "Set Me Free," and "Th3y Say" (featuring Kung Fu Vampire), I.L.A.M.'s call to the masses stands firm stressing that you don't need a machine behind you to contribute realism.

If you're looking for that sound that's been in the crates of your mom's basement instead of on the shelves of media establishments, I.L.A.M. is a great start.

Their goal is to maneuver without a major label by keeping all aspects of the business (printing CDs, designing artwork, etc.) in-house. Creating their own tours nationwide, these West Coast vets will arrive in Erie to bless the musically-diverse Basement Transmissions stage: a homestead for local musicians and a welcomer to touring acts. If you're looking for that sound that's been in the crates of your mom's basement instead of on the shelves of media establishments, I.L.A.M. is a great start. Special guests of the evening will captivate you as well: Erie BattleLeague victor Heresy, demanding rhyme slayer Tone Fach, legendary jockey DJ Nitro, and determined King Dannodee will represent the 814 before California's presence. Huge props to tattoo artist David Steele (Ink Assassins) for putting together an amazing event! – Charles Brown