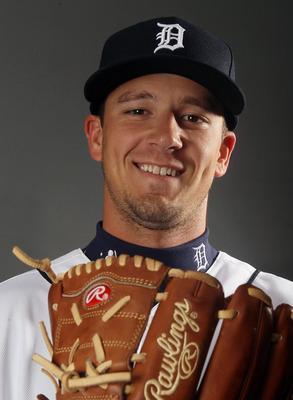 Left-hander Drew Smyly has won the open spot in the Tigers rotation.

He met with Tigers officials this morning, including manager Jim Leyland. Smyly said they told him he had made the starting rotation.

Smyly, 22, beat out five other candidates who all have more pro experience than he does. But Smyly, who has pitched one year of pro ball, pitched the best of any of them this spring.

Smyly said he was told by Tigers officials that he will make one start in the minors before his big-league debut. Manager Jim Leyland said that Smyly's first big-league start will come on Thursday, April 12, against visiting Tampa Bay.

Smyly went 11-6 with a 2.07 ERA and 1.10 WHIP across two levels of minor-leagues in 2011, including starting seven games for the Erie Seawolves.

You might remember him as stealing the show from Bryce Harper when the ueber-prospect blazed through town last summer:

And then there's Drew Smyly standing in front of the camera in the clubhouse after the game, reciting the usual cliches. "You've just got to throw strikes." "Just got to change the pitches up." "You just go out there and compete." He's trying to be serious – after all, his mug is going to be splayed across local televisions tonight – but a shit-eating grin keeps stealing over his face. And why not? Fireworks outside, a rowdy crowd, a three-hit, eight-strikeout performance under his belt, and no doubt a straw-haired girl back home in Arkansas. He hasn't given up a run yet in a SeaWolves uniform. So far, he's nailing this level, and it's nowhere but up, baby! He's on top of the world, that especial vantage-point of the young.

And Smyly's barely suppressed joy is a nice reminder of why we keep coming back to these games, why we keep looking for greatness wherever we can, even in a finesse lefty, whose modest, if useful, ceiling is a middle-of-the-rotation guy. Maybe Saturday night's game belongs to Bryce Harper, who hits a home run and barely misses a second, leading his team to a 10 – 7 win over Erie. But tonight belongs to Drew Smyly and that beautiful, wonderful shit-eating grin.

That Smyly's promotion is a surprise is a massive understatement. For starters, few ranked Smyly atop Detroit's prospect charts. That's because Smyly's fastball sits in the upper 80s, and he relies on deception and control -- attributes that play well in the majors only with perfect pinpoint control. Most think Jacob Turner is the potential star -- but Turner lost out on the rotation spot to shoulder tendinitis and is remaining in extended spring training to start the year.

Really, all Smyly is expected to do for his career is fill out the back end of a major-league rotation, a crafty left-hander eking out a living through deception.

In short, he's impossible not to root for. Here's hoping he proves the prognosticators wrong.

Good luck to ya, kid.