by Alex Bieler
View ProfileFacebookTwitterInstagramGoogle+RSS Feed
December 23, 2014 at 9:20 AM 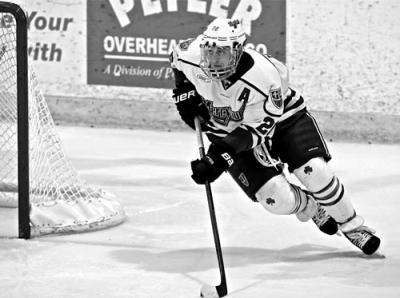 While many people will be watching Ohio State University play the University of Alabama in the Sugar Bowl as part of the new four-team college football championship playoffs New Year's Day, Erie will have a chance to see the Buckeyes up close this January, just in a different sport.

Mercyhurst University will host 5-9-1 Ohio State in the Snowtown Throwdown at Erie Insurance Arena, a two-game bout on Friday, Jan. 2 and Saturday, Jan. 3 between each school's men's ice hockey teams. While most hockey fans typically head to French Street to see Connor McDavid and the Erie Otters hit the ice, this major matchup between Division I powers is big enough to move from the Mercyhurst Ice Center to the building formerly known as the Tullio.

"We are extremely excited to be hosting this event," said Mercyhurst head coach Rick Gotkin in an online announcement for the Snowtown Throwdown on the Mercyhurst Athletics website. "To not only have a nationally-recognizable school like Ohio State come to Erie to play, but to be able to do so at the beautiful Erie Insurance Arena is unbelievable."

It's a big matchup – both in terms of opponent and stage – for the 8-5-2 Lakers, who defeated No. 17-ranked Robert Morris University 3-0 in the squad's last game. Even better, the Snowtown Throwdown is an opportunity to see a pair of talented Division I teams right here in The Flagship City. – Alex Bieler