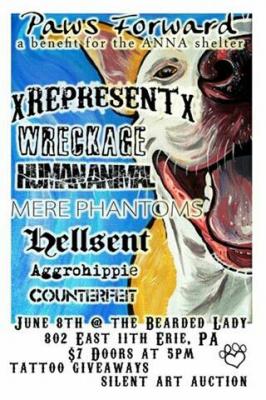 With the closing of Forward Hall and The Hangout in the last couple of years, it's been a while since so many Erie Hardcore bands were brought together to for a single show.  In fact, the last showcase of Erie Hardcore came with Domestic War's final show at Basement Transmissions in January which also featured Erie bands Taste the Steel and xRepresentx.

In lieu of these now defunct venues, places like Basement Transmissions and The Bearded Lady have begun to carry the torch for Erie's underground music scene.   And eager to continue Erie's nearly two-and-a-half decade long tradition of hardcore, Erie bands xRepresentx, Human Animal, Aggrohippie, Counterfeit, Hellsent, and The Masquerade are coming together at the Bearded Lady for a benefit show supporting the ANNA shelter.

To an outsider, or anyone who's not involved in the hardcore music scene, hardcore shows may seem like nothing but a bunch of meat-heads jumping around and throwing their fists at each other to this music that must certainly be played and listened to by no one but mindless violent hooligans.  There can't possibly be any positive and constructive message to this, right?  Wrong.

Shows like this are out to change the image of the hardcore scene in the public eye.  Second to supporting the actual cause, of course.

"This for sure will change the image of what hardcore is in some peoples mind," said Derek Ski, the vocalist of xRepresentx.  "It shows it's a scene based on much more than just music, and can produce positive change/outcomes".

The Association for Needy and Neglected Animals (ANNA) started in Erie in 2004 and has worked to giving animals in need a second chance at a happy life with loving owners.  Since many of the people in the scene are pet owners, and some are even vegans and animal rights activists, this show is supporting a cause near and dear to the hearts of many people within the Erie's scene.

"I'd say it's very important to support causes that are in your interest scope," Ski said.  "There's not a whole lot of [benefit shows] anymore, whereas there was frequently something being donated years ago".

xRepresentx has been a staple of Erie Hardcore since they began carrying on Erie's Straight Edge traditions with their mosh worthy tunes in late 2002.  Human Animal also carries with them some traditional Erie Hardcore, being made up of members from historic Erie bands such as Brother's Keeper, Shockwave, xDisciplex AD, Abnegation, and many more.  They recently released their debut EP titled "Dark Days".

This is not the first benefit show in Erie made up of hardcore bands.  Every year, around the beginning of July, St. Corey's Day is held in honor of Corey Wolfram, a member of Erie's hardcore community who died from diabetes in 2009.  Proceeds from St. Corey's Day go to the Erie Diabetes Association.

The show will be held Saturday, June 8, at The Bearded Lady, located at 802 E. 11th St. in Erie.  The doors open at 5 PM and there is a $7 admission, but a discounted price will be given to anyone who brings a collar, leash, harness, or dog food.   There will also be a raffle for $50 gift certificates from multiple local tattoo artists and a silent auction for paintings by local artists.

Whether you're a regular at Erie hardcore shows or just looking to see a different side of the vast culture of Erie, or whether you love all animals or just your pets, everyone is encouraged to come support this cause.  Not only will you be supporting a local animal shelter, but also Erie's culture by showing support for local musicians and artists.  This show will give everyone in attendance a great sense of community and hometown pride.