Spend a Special Evening with Gary Lucas at Artlore Studio

Gary Lucas is liable to both entertain and inspire the audience at Artlore Studios. 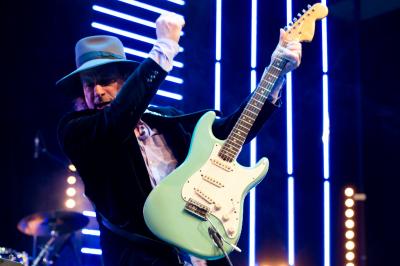 This April, Artlore Studio will be hosting a very special show. The performer in question has been referred to as a "guitarist, innovator, legendary musician" and lastly an "artist of the creative highest level." His name is Gary Lucas, and he was a member of the psychedelic and experimental rock bands Captain Beefheart and Gods and Monsters.

While Captain Beefheart gets remembered for many reasons — their 1969 magnum opus Trout Mask Replica, lead performer Don Van Vlet's competitive (and at times, contentious) friendship with peer Frank Zappa — but Lucas actually performed on two of Captain Beefheart's most critically acclaimed and successful '80s ventures. Lucas is credited as performing guitar and French horn on 1980's Doc at the Radar Station as well as glass-finger guitar, slide guitar and a National steel duolian on 1982's Ice Cream for Crow (noted by John Peel to be one of Captain Beefheart's best albums).

"I believe the importance of Captain Beefheart is huge," says Artlore Studios owner Stephen Trohoske. "I still believe he remains one of the most effortlessly eccentric musicians to emerge from rock culture. Like Zappa, I believe he brought a high level of both physical playing and creativity to the music as well as a sense of humor that always seemed to keep the music human."

"It's all part of our vision at Artlore Studio and we plan to continue to do shows like this in the future," continues Trohoske. "This is a creative space and we want to keep that vision strong and growing."

Over the years, Lucas has performed with an incredible resume of artists, including Nick Cave, Lou Reed, Allen Ginsberg, Iggy Pop and Jeff Buckley, who most notably performed in Lucas' band Gods and Monsters in the 1990s. Lucas' influence and legacy is reflected even in Erie's own psychedelic acts, and as Trohoske will be the first to say, a performance like Lucas' is liable to both entertain and inspire audiences. — Aaron Mook

An Evening with Gary Lucas