Spiritual Rez will be coming back around on Saturday, April 23 for another sure-to-be blowout evening of killer live music. 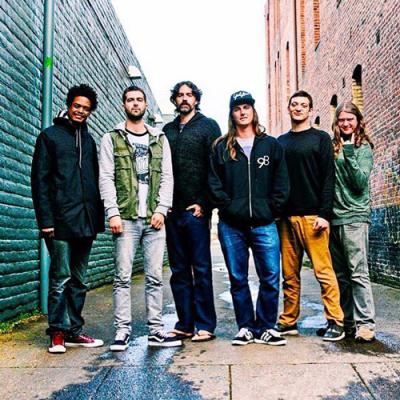 At a first-few-seconds kind of listen, it may be easy to pass Boston's Spiritual Rez off as just another upbeat, bouncy reggae band (not that there's too much wrong with that).

At a first-few-seconds kind of listen, it may be easy to pass Boston's Spiritual Rez off as just another upbeat, bouncy reggae band (not that there's too much wrong with that).

Dig in and get down a little deeper with them, though, and you'll hear some really singular, interesting stuff happening. One critic, Hippo Press' Michael Witthaus, summed it up pretty well: "Start with a dose of old-school, Marley-Toots-Tosh reggae and infuse it with everything from Sun Ra Arkestra freak jazz to Steve Vai guitar pyrotechnics. Inventive intersections like these define Spiritual Rez."

They were a damn big hit with a packed-house, happy-footed crowd when they last hit the Kings Rook stage in October of 2015, and the Rez will be coming back around on Saturday, April 23 – along with special guests The Remnants and MoChester – for another sure-to-be blowout evening of killer live music.

The Rook has "a more-than-usual unique vibe," and "it's cool coming back," Rez bassist Ian Miller said when we caught up over the phone recently. The band was in Denver and about 35 days into their current across-the-nation tour.

Also spending the better part of the last year working on a new album in sunny California, "we've really been riding the energy from that," Miller said, and "it's kind of honed our live show more than [past studio work] ever has."

Now, don't get him wrong: "It's still the same rage-fest" that Spiritual Rez has long been known for, but it "feels new and unique."

That, for any band, and any fan of live music, is a very good thing. – Ryan Smith