A sober look at Erie's favorite day of drinking

by Alex Bieler
View ProfileFacebookTwitterInstagramGoogle+RSS Feed
March 21, 2012 at 10:14 AM 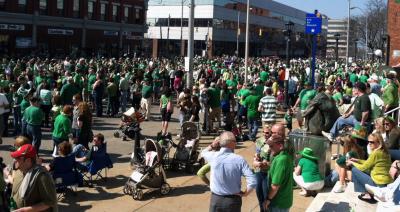 When I first came to Erie, I quickly picked up on some of the local pastimes, but one activity really jumped out to me: Erie's love of getting hammered in public. For fans, St. Patrick's Day is the highest of holy days in the church of drinking.

My day started at 5 a.m., but neither kegs nor eggs were in my future. Instead, I was set for a 13-hour workday with Z102.3. As a service to those who can't remember that day, I kept a timeline of St. Patrick's Day from the perspective of a sober man.

6:36 a.m. – Just arrived at Sullivan's Pub & Eatery. There's a small crowd waiting outside the door. Apparently some have been waiting for over two hours.

7:01 a.m. – Doors just opened. The second person in is an older man dressed as a leprechaun. That didn't take long.

7:17 a.m. – Older leprechaun is here with his son, also dressed as a leprechaun, and his brother, who apparently missed the memo. He's trying to make up for it with about 20 of our stickers.

7:50 a.m. – About 95 percent of the people here are wearing Irish-colored clothing. There's more green here than a High Times convention.

8:02 a.m. – Just noticed where these beads are from. Nothing says Ireland like: "Made in China."

8:08 a.m. – A mother just dropped off a pair of flip flops for her shoeless daughter right before she walks into the bar. Oh, motherly love.

8:50 a.m. – Now at Scully's Pub and Pizzeria. Nipple and forehead shamrock stickers are quite in fashion here.

9:05 a.m. A pair of women in their 50s keep glaring at me because I couldn't give them any free T-shirts. I think they want to hurt me.

9:18 a.m. – Someone has brought a green vuvuzela to the bar, and he isn't afraid to use it. He is the first drunk person I feel like punching today.

9:45 a.m. – Some college kid is dressed up like an Irish gangsta, complete with flashing grills. He joins vuvuzela man on my list.

11:11 a.m. – A woman just took more stickers than she has teeth. She took four stickers.

11:30 a.m. – So far "Shipping Off to Boston" is tied with "Cotton Eye Joe" for most times played. I've hidden the blood in my ears with shamrock stickers.

11:43 a.m. – A woman just told me that she won't come inside Molly's because it smells like eggs, but she's going to follow me for the rest of the day. I'm scared again.

12:21 p.m. – There's a child scavenging for beads on the floor of the Tap House, but in the battle of small girl vs. bead-starved drunken mess, the latter always wins.

12:32 p.m. – Some inebriated people are climbing on each other's shoulders trying to free beads stuck in the ceiling. I'm beginning to think St. Patrick's Day is purely a Darwinian population control tool.

12:53 p.m. – A mother just walked by saying "I hope Allie is wearing pants." Someone should find Allie.

2:30 p.m. – Watching the parade. The Guinness float is a crowd favorite, but my vote goes to the extremely confused elderly man in a Hoveround that seems to gotten himself in the procession.

3:22 p.m. – The same woman has been dancing on the bar at Park Place since we got here over half an hour ago. Luckily, none of the impressive number of 50-year old women has joined here yet.

3:58 p.m. – There are few things classier than a Playboy tramp stamp and spinning nipple lights.

4:12 p.m. – This drunk couple really want to go downstairs in Sherlock's. My guess is that they need to discuss family budgeting.

4:23 p.m. – A girl is trying to flash the crowd, but her no-nonsense friend stops her. Crowd seems to dislike her friend.

4:43 p.m. – An inebriated gentleman has been talking to my colleague and me about a reggae song that starts in Latin that he believes plays on Z102.3. Meanwhile, his friend comes over and introduces himself as "the driver."

5:11 p.m. – There's a trio of guys in Boardwalk wearing nothing but green tutus, wife beaters, and briefs. They seem popular.

5:27 p.m. – A man walked by that seems to have tried to dye his beard. That, or he's been huffing lawn trimmings.

5:33 p.m. – Note to girls coming out of the bathroom: you should probably zip up your pants when you're done.

6:24 p.m. – Girl falls over in slow motion as her beer suddenly starts to spray in the air. She proceeds to show her new bruise on her left breast to her friends. She knows how to make friends.

7 p.m. - Finally free. By the end, the only way I know how to forget the drinking crowd is to join them. Now, I just think back to that day. I wonder where the leprechaun family is at now. Did Allie ever find some pants? What would Erie's average blood alcohol content be if they breathalized everyone?

Guess I'll just have to find out next year.