A Chat with the 2018 Comedian of the Year 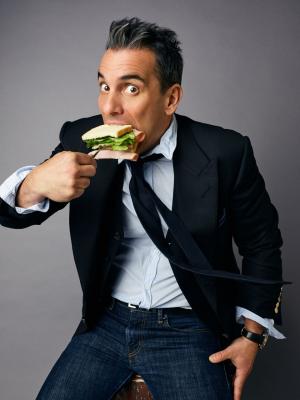 Comedian Sebastian Maniscalco is starting the new year doing what any happily married man with a baby daughter and another child on the way would do — go on national tour for six months.

The Chicago-born Italian is one of the premier comics of today — he was recognized as Billboard's Inaugural Comedian of the Year in 2018; he had a supporting role in the film Green Book, and he will appear in Martin Scorsese's upcoming film The Irishman alongside a star-studded cast that includes Robert DeNiro, Al Pacino, Joe Pesci, and more.

But his willingness and passion for his work would leave one to believe that he is not yet at the "top of his game." Because if you were, the only way to go would be down. And his tour and his book (both aptly titled Stay Hungry), his acting, his family, and everything else — tells us otherwise. And if you haven't had the pleasure of seeing or hearing Maniscalco, well, you've been missing out. His routine is exceptionally relevant to the absurdities of our society. His lines emphasize the dramatic everyday moments we experience in life, but his facial expressions and contortions exaggerate that absurdity tenfold — adding to the list of masters of physical comedy — the likes of Steve Martin, Jim Carrey and Steve Carrell to name a few.

And now he's coming to Erie. I had a lovely opportunity to get a small glimpse into this off-stage personality prior to his performance on January 31.

Rebecca Styn: Your "Stay Hungry" theme is everywhere — your new book, the tour. What inspired the title?

Sebastian Maniscalco: The name originated as the writer and I were working on the book. I was telling her stories about my life and always staying positive through some of the down times, how I remained patient and never rested on any successes, and she said, "essentially then, you're always staying hungry," and that clicked for both of us. We thought it was a great title for the book which is lighthearted in nature and about myself and growing up — and doing stand-up for the last 20 years. It's meant to be inspirational in ways, and life taught me that things don't happen overnight. Oh, and of course, it's funny.

RS: Your sketch about growing up Italian was reminiscent in many ways to me and my family. Are there any other funny memories that you haven't explicitly discussed in your stand-up?

SM: My comedy has all been observations over the course of my life. I don't sit in a dark room and reflect of how I grew up and the absurdities of my upbringing. There is no real process — and my comedy comes from real life. I'm always adding to the show — I have a child who is 20 months old — and one on the way — a little boy. I am sure that will find its way into my material in the future.

RS: In my research, I gathered that your kind of big break after many years came with your tour with Vince Vaughn as part of a comedy show. How did that introduction happen?

SM: I wanted to get into comedy just because I had a general knack for telling a story. My family was fun and lighthearted. Everyone was always laughing. I like to sit back and observe people and learned I had a knack for it. I graduated from Northern Illinois University, saved up $10,000 and moved out to LA in 1998. In 2005, I met Vince Vaughn at a dive bar that he hung out in. He asked me and three other comedians to be part of the show — we hit 30 cities in 30 nights. That came out in 2008. Shortly after I got on the circuit and became a working comedian.

RS: Being from Chicago, I was sorry to hear about your Bears last week.

SM: Oh, what a disaster! My father and I are big Bears fans — and on the upside he happened to be in town so we got to watch it together. We are always screaming at the television. It was heartbreaking to see the end of that game, but also cool to share it with him.

RS: I know you have a new Netflix special premiering January 14. Will you have a lot of similar material when you come to Erie at the end of the month?

SM: It will be a mix. As my material comes from my experiences, I have had many news ones between the time I shot the special and now.

RS: I actually find comedy funnier the second time around — and even better when you're experiencing it with someone that's never seen it.

SM: Some people feel like you, but there are some that are disappointed if it's not all new material. Sometimes you can't win in comedy. Some guests feel like they've been ripped off if it's not all new — it's hard to tell. Unlike when you go to hear a rock band, everyone wants to hear the classics, with comedy, you want the newer stuff.

RS: You have a supporting role in the new drama Green Book, also starring Viggo Mortensen and Mahershala Ali. How was that experience?

SM: Green Book was my first meatier role. It's the kind of movie that can make you laugh and cry. It won three awards at the Golden Globes and it was a great experience working with Viggo Mortenson and everyone else. I'd like to do more movies over time, but it's nice to be able to choose what to be part of, since comedy is my main focus.

RS: Viggo Mortenson was in Erie a number of years back filming The Road. Have you been to Erie?

SM: I haven't been before, but I do know where it is.

RS [trying to be funny]: Well, if you're curious about the Erie weather in the winter, just ask Viggo. He filmed part of The Road here in the winter, at Presque Isle State park. It focused on… "a post-apocalyptic wasteland…"

SM [after a pause]: "Well, I imagine Erie has to be much like Chicago in the winter. I've had a lot of opportunities to perform in bigger cities and 2019 is about opening myself up to the mid and smaller size areas. I want to go places I've never been before. I'm looking forward to being there."

I guess I'll leave the comedy to the pros.

Want to know more? Check out Maniscalco's Netflix special Stay Hungry, which debuted January 15, or his podcast The Pete and Sebastian Show which airs on Sirius XM channel 99 every Friday at 5 p.m. — or better yet, see him live at the Warner Theatre, 7:00 p.m. on Thursday, Jan. 31. Tickets are still available via sebastianlive.com.

Get Into The Groove

by Matt Swanseger1/16/2019, 10:00 AM
Erie's Best Band favorably judged and booked for their covers, but has more in store for 2019
sebastian maniscalcocomedytranscriptinterview