by Leslie McAllister
View ProfileFacebookTwitterRSS Feed
August 21, 2013 at 8:22 AM 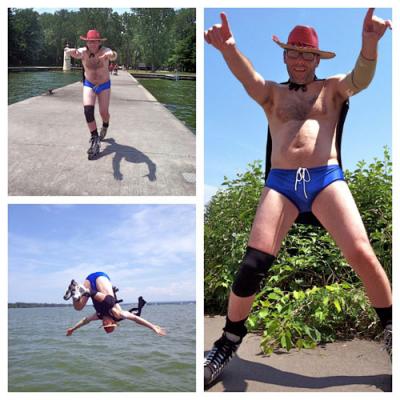 I think we need to discuss the alter ego. Cicero, a Roman philosopher, called it the second self or trusted friend; he was the one to coin the phrase.

Originally, I believed he meant it to be like a diary of some kind, something you tell you secrets to; we have come to know it as that which we are not but aspire to, or even what Clark Kent is to Superman. I have a Pinterest board titled, "My Alter Ego Style," where I pin things I wish I could wear to work; like leather pants, a marabou vest with leopard print boots, and a sequin bustier. Alas, sigh and moving on, to work I wear a pencil skirt, clogs, and a blouse.

Here's my point – there is liberation in fantasy. There is freedom in donning a cape and leggings. There is bliss in being that person that frees you. I read a Marianne Williamson quote recently: "There is nothing enlightened about shrinking so that other people won't feel insecure around you. We are all meant to shine, as children do."

I think she means wear the sequin bustier and let your freak flag fly. Let your little ones wear the "Iron Man" costume all day and the tutu and cowboy boots and the princess tiara with the camo pants. We all need to connect to that inner ego. Wear what makes you, you… just like George Hammill does.

How did this extravaganza all start? "The Once a Year Semi Annual Sabado Gigante Extravaganza Festival" (sabado gigante is Spanish for 'giant Saturday') just celebrated its sixth year. The idea started 15 years ago. I always wanted to throw on a pair of big headphones, some mini shorts, a few red, white, and blue sweat bands and roller skate around the peninsula – completely lost in some great tune and jamming with some sweet moves.

Six years ago, everyone kept asking me where I wanted to go drinking for my birthday. I was fed up with that scene, and decided I was pulling the trigger on my dream. Had to give it a name that made no sense – accomplished that – and invite a bunch of friends to join in. Of course, I had 20 or more people saying they would come but only one showed, my great friend Stan. Dressed to the hilt, we scared the hell out of everybody that day and had a blast. After people saw some pictures and heard the tales of greatness, I was encouraged to do it again. The rest is history, as they say.

Where have you sought inspiration for your costume, and what is the name of your alter ego? In the beginning, inspiration came from the Venice Beach scene. Nowadays, it's about how little can I wear and how far can I push the envelope. Funkatronic is my alter ego name, or Funkatronic and The All-Star. Forged on a night of debauchery in my youth, myself and another great friend – The All-Star – had an idea to become the tag-team wrestling champions of the world in the WWF. We had a whole act worked out and how we would cheat our way to the top.

Most memorable year to date?  I suppose the third year. It was the largest gathering. I think 10 friends showed all dressed up in some great costumes. The beach was very busy that day and I think a lot of families went home with a story. Probably a lot of kids were unable to sleep alone that night, too.

Describe your personal style.  Guess I have three styles I roll with. When I go out, it's a Satin Funk look, which consists of '70s collars and tight pants to show off my attributes – a lot of animal print polyester shirts. My go-to style is the classic jeans and T-shirt; mostly, because it's simple and I don't have to think too much, but mostly, because I have the worst old man Polish legs in the world – I know, 'what about the Speedo?' – we all have to take one for the team sometime.  Last, is my at home mash up of Tribal-Zen-Buddhism – trying to go for a Samurai-Smoking-Jacket look. Which reminds me, I really want a collection of silk robes.

If you could dine with a celebrity dead or alive who would it be and why? Easy. Elvis…Why? He's the King.

Burgers or hot dogs? Hot dogs and no ketchup. You don't put ketchup on a hot dog. Anything else is fine but not ketchup.

Your most loved man-cessory or man jewel. Nunchucks.

What does Erie need to shine brighter? A cleaner lake. Global climate change and pollution aren't a political statement. It's about looking after our own backyards. People who think this is a hoax are like car bumper stickers; they let me know exactly whom I will not be friends with.

Favorite place in Erie to people watch. CelebrateErie is the most frightening place, but my favorite is the Erie Fan Fare. All of those band nerds are spectacular. Funny how nerds are the new jocks, which sucks for us nerds; we're now the popular ones everyone wants to be around.

A little about George. I am the guy who's been annoying all of you on the radio. I work for Rocket 101 doing sales and radio commercials. I do not have any projects going on right now, but if anyone wants to check out my awesomeness, you can find me on Beach 6 when the surf breaks four-feet, shredding waves on my flat deck kayak.

Find me out on the town and challenge yourself to get noticed by the Erie Reader!

A Look Behind Melancholy with Gaby Reyes