Tae Bo Creator Invites Us To Kick Out Corona

Workouts in the living room with Erie native Billy Blanks 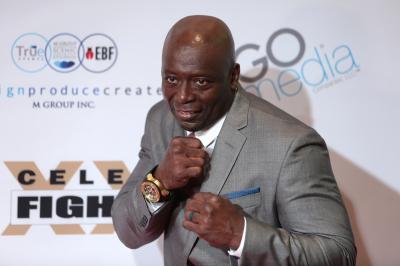 Pause for a moment and take an inventory of everything in your living room. I haven't left my house in a solid month; what's the point?  Because even though everything may be accounted for — sofa, TV stand, coffee table, throw rug, loveseat sectional, etc. — you're probably missing Billy Blanks.

Yes, the same Billy Blanks that rose from Erie's West Bayfront neighborhood to stardom in the 1990s, when his Tae Bo® VHS workout series captivated both the fitness community and our pop culture. The 64-year-old fitness guru, martial artist, and actor (appearing such films as Bloodfist, The Last Boy Scout, and Kiss the Girls) is employing the hashtag #kickingoutcorona on social media while inviting generations young and old to take advantage of his YouTube video series, "In the Living Room with Billy Blanks."

"We must maintain positive morale and hope for the best," writes Blanks in the playlist intro. "We won't let this virus take away the most valuable things that we have, health and faith. Keep up with me during these next few weeks and let's prove that there are #noexcuses"

I sampled a handful of these workouts to determine if I indeed could match the pace of the remarkably fit super senior.

The playlist is freely accessible through the official Billy Blanks YouTube channel, or directly through this link.

Primarily a sense of rhythm and an appreciation for motivational quotes (e.g. "Fight to win!" "Put on your power!"). Grand Master Blanks has attempted to be as inclusionary as he can with these workouts, acknowledging the majority of us don't have a (Tae) bona fide home gym (although he may have been presumptive in assuming we have a sense of body control or rhythm).

Most of the entries in this series utilize nothing more than the meat jacket you were born with (and may have subsequently padded). In some installments, he'll teach you how to MacGyver highly effective fitness apparati out of common household items, such as your dining room chairs or frozen bottles of water. As far as purchasables go, an inversion table and gripbells (wherein the handle is the weight) is about as exotic as it gets.

But you're welcome to resurrect your brightly colored tank tops from 1997 if you're feeling Tae Bo®-stalgic.

In case you didn't know, Tae Bo® is a portmanteau of the words taekwondo and boxing — disciplines with which Blanks has associated himself since the late '60s. This is a "karobic" (karate + aerobic) exercise program that has you marrying feet to hands in rhythm, often to the pulse of electronic music (on at least occasion with strobe lights to really sell the at-home rave dojo effect, so beware if you're photosensitive).

My sampling included a fast-paced Tae Bo® Body Blast segment, along with a chair exercise program emphasizing legs and core. Seeing as I was at the height of my pudgy prepubescence when the Tae Bo craze originally hit, exercise was a far distant second to Tony Hawk Pro Skater on my Sega Dreamcast (RIP). However, two decades later, I can see why it caught on — I was a veteran of many dance battles in my bargoing 20s, and I felt a similar vibe here … without humiliating any particular physical opponent (wink).

"In the Living Room with Billy Blanks" is both free and free-spirited, so there's #noexcuses not to "GET UP" and "GET ACTIVE" during quarantine, while society continues to work on #kickingoutcorona. Try not to leave this man out of your home fitness inventory again.

Matt Swanseger (mswanseger@eriereader.com) definitely needs to step up his Technicolor tank top game. And his jokes.