Taking Down the Tarps: Occupy Erie Protesters Asked to Refrain from Sleeping in Gazebo

Occupy Erie protesters at Perry Square took down their tarps in apparent concession to a message from the Erie city administration.

by Jay Stevens
View ProfileFacebookTwitterGoogle+RSS Feed
October 25, 2011 at 12:00 AM 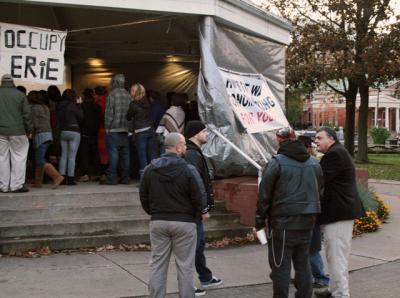 Tonight at about 8 p.m., Occupy Erie protesters at Perry Square took down their tarps from the park gazebo in apparent concession to a message delivered to the group from the Erie city administration by Dave Rocco, special events and licensing coordinator for the city's Department of Public Works.

Protesters had been camping out at Perry Square for several days as part of the anti-corporate demonstrations that originated in New York City and quickly spread across the globe.

According to Rocco, the city wanted the protesters to remove the tarps and other equipment from the park gazebo – including whiteboard, sleeping gear, coffee pot, tables, and chairs – and to refrain from sleeping in the park, because the city administration felt protesters sleeping the park were violating city ordinance.

Park protesters would seem to be in violation of Erie ordinance 955.07(g), which states, "No person shall sleep or protractedly lounge on the seats, or benches, or other areas..."
Asked if he were delivering an ultimatum from the city, Rocco said, "I don't know if it's an ultimatum." According to Rocco, the protesters would not be evicted tonight if they slept in the park. "If they want to stay tomorrow night," said Rocco, "there's going to be an issue."

After a long and contentious meeting lasting over 2 hours, Occupy Erie protesters took down the tarps and agreed to not sleep in the park, instead vowing to maintain a "24-hour presence" in the park tonight. A final decision about sleeping in the park would likely come in the group's general assembly tomorrow at 5:30 p.m.

The warning delivered by the city tonight seems to be an about-face from the stance the city took towards the protest just a few days ago when protesters met with Erie Chief of Police, Stephen Franklin, and Dave Rocco. At that time, protesters were told no legal action would be taken against the demonstration.

According to Rocco tonight, the new policy towards Occupy Erie was decided on during a meeting with administration officials and the chief of police earlier that day. Apparently the city administration grew concerned when an increasing amount of equipment was being placed in the gazebo at Perry Square. "More and more people were spending the night. It was starting to look like an apartment," said Rocco of the chairs, sleeping gear, and other items at the site.

"They can stay here and protest," Rocco said of the city administration's stance towards the ongoing demonstration, "but they can't sleep here at night."

After Rocco spoke to the protesters, sometimes passionately, the demonstrators discussed their options. Tempers flared, and at times some protesters stormed away from the meeting. Most of the frustration was aimed at the group's "horizontal" organization – the movement has no leaders and must decide on all issues by general consensus, meaning that all, or most, protesters must agree to a proposal before it's carried out, and that any and all who wish can have a turn to speak.

Finally, at about 8 p.m., general consensus was reached that the tarps at the gazebo should come down. Less clear was whether any of the group would attempt to keep sleeping in the gazebo despite the administration's threats, or whether the demonstrators would simply try to maintain a long-term presence at the park, or find some other means to continue the Occupy Erie protest. On why the tarps came down, Abby Counts said, "We're trying to push the envelope without being crushed under the heel of authority."