Tales Behind the Creative, Episode 10: Nathanael Merry (NARY) 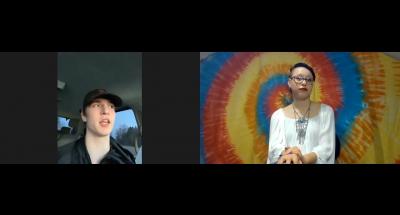 On the tenth installment of Tales Behind the Creative we welcome local rapper, producer and engineer, Nathnael Merry (NARY). His stage name NARY is a blend of his first and last names that was given to him by engineer Pedro Perez who has made music for big time artists such as Mike Posner.

His interest in music has evolved since the fourth grade and he has been centering his focus on expanding his musical career for three and a half years now. One of the most inspirational moments in his performance career occurred when he opened for one of his favorite bands, Convictions in 2018 at Basement Transmissions. Since then he has been writing and producing his own lyrics and beats. Although he likes to mainly do solo work, he finds that it is always good to collaborate with other creatives in the field to learn new techniques as he was most recently in the studio with Chauncy Bill$Up as well as working with producer Misstiq from Australia.

In terms of the COVID-19 pandemic amidst us, he is confused about the lack of awareness that is associated with the virus as we have dealt with times like these in the past and wishes that we focused more funding on disease prevention rather than topics such as politics and war. He is most disappointed that this has caused him to miss out on performing at all the booked gigs he had scheduled for these months we've been stuck inside as well as the stress of going out to obtain the everyday necessities such as food.

To pass the time in a positive way, NARY has been spending his free time gaming as well as investing time in Adam Ivy's Sell Music Master class which has changed his musical perspective and taught him new techniques for future projects. He is working on four new ventures with the first being an album titled, Introspection and three other EP's that'll contain seven songs each with the titles, Inferno, Purgatory and Paradise that are all based off Dante Alighieri's The Divine Comedy. He is working on not being so picky and persistent in editing his music and learning to just stick with certain vibes the first moment that he gets goosebumps from them.

His goal in uplifting people with his music and personal life before, during and after these times is that of providing an outlet for fans/followers/friends to get through tough times. He has teamed up with the Hope For The Day non-profit organization and plans on hosting a free music/art event to spread awareness of mental illness by bringing creatives and on-goers together to let them know they are not alone.

So if you want to listen to his productions and reach out to NARY, you can find him via his social media accounts on Facebook and Instagram as well as exploring his music on Youtube, Soundcloud and Spotify.

tales behind the creativenarynathanael merry