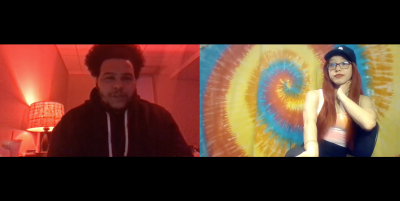 On the fourteenth installment of Tales Behind the Creative we welcome local music producer and audio engineer, Chauncy Bill$Up. Bill$Up, who is an independent contractor has been in the industry for six years now and continues to expand his brand in more ways than one.

His start in the music industry is one that came at random. In high school, Bill$Up was a football player, but suffered a very serious and traumatic injury which led to him downloading a beat program as a joke but also to fill his time while recovering. After letting friends listen to his productions and receiving rave reviews, he continued with his self-taught talents and evolved his new-found creativity into something fierce. He took some time to expand his music career while he lived in Manhattan, N.Y. and started to collaborate with people both big and small.  Now he has worked with locals from Erie such as Major Coin (Aaron Rennel & Kenny Ba$e), Mingo Williams, NARY, Sammy C, ZBaby-ZKilla and most recently a new genre of house beats with Joe Kodba. He even worked his way up to producing beats for big names in the industry such as members from 808 Mafia, Jet Life, Curren$y and many more.

His passion for producing music is strong and he has some major goals when it comes to his career. He aspires to get artists out of their comfort zone and to check their vibes in a different element when in the studio. With a stockpile of works, he draws inspiration for his tones and beats from whatever moment or place he may be in. He takes time producing intricate sounds in his music that can release a variety of different feelings and emotions because he feels there are more answers "internally rather than externally."

As for the COVID-19 pandemic, he has a sister who is on the front lines as a nurse so he holds a more serious perspective on the current situation. He is glad that we are keeping things locked up but we need to find a balance between mass hysteria and self-awareness. Bill$Up feels that Erie is doing well with handling this pandemic as the community bands together. Another focus should be that of financial literacy in that we should pay attention to things such as the stock markets, oil prices, and to just be updated on the change of events released on the news. This virus will create changes in normal life but those changes are essential for the better.

by Symoné Crockett4/2/2020, 12:14 PM
Like the album cover, the setlist starts at the red bar which is a representation of grit and hard-hitting tones and times.

To keep himself busy during these times he is expanding his knowledge in the realm of producing beats with a new program he stumbled upon as well as trying his hand at piano and working on some melodies. As a chronic overthinker he is finding ways of figuring out when "enough is enough" and also not letting the bustle of this pandemic affect his normal routine. In his downtime he has been binging new TV shows/movies and sticking to his meditation, exercising and dieting habits. One thing he is angered about is that as a previous toilet paper salesman, he wished he would have kept the business alive for times like these.

As for advice for his fans/followers and friends/family is that of "leaving no stone unturned." Take the time to sit in your room without any source of technology and take a good look in the mirror. Finding the silver lining within ourselves is the key to being thankful for the lives we have and obtaining the gratitude that will make us be at ease with whatever decisions, good or bad, that we have made throughout our lives. We must appreciate ourselves and the world around us or we will all crumble underneath the pressure.

If you vibe out with what Bill$Up has to lay down then you can find him on social media via Facebook, Twitter and Instagram as well as locating all of his music via Apple Music, Spotify and Soundcloud.