Tales Behind the Creative, Episode 2: Yeshuwa 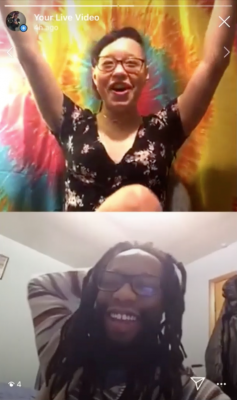 On the second episode of "Tales Behind the Creative," we welcome local hip-hop artist, Yeshuwa Myers. Yeshuwa, who is an Erie native, recently relocated back to our community in March of last year after living in Arizona to pursue his career in Audio Engineering. He successfully completed all of his credits at The Conservatory Of Recording Arts & Sciences in order to receive his certification, going on to do stagehand work for a multitude of well-known artists.

With his return back to Erie, his music career has skyrocketed. Even though he initially thought of himself as a behind-the-scenes type of guy, he has been performing on stages all across the community and releasing songs and music videos like rapid fire. His most recent music accomplishment was that of his album release, "Blessed Vibes Only." He also produced, directed, and edited his own music videos to "Big Business" and "Chosen." When listening to any of these tracks you are instantly put into a positive mood with his divine use of words and beats.

Not only does Yeshuwa provide music for the soul but he also provides words of wisdom for the heart and mind. You can watch his series of "The Daily Vibes," where he gives influential instructions of how to elevate to a higher power and radiate nothing but positive vibes which is something that we all could use during these trying times.

During this pandemic, Yeshuwa misses the interaction with his peers as most do in this period in time. Whilst he is stuck inside, he continues to create new music and ponder about new collaborations with not only different artists and producers but for new merchandise as well. He plans to make big moves once this is all over, as he would say, "things will be coming out of the blue."

So if you're looking to be uplifted while we're stuck inside under the Stay-at-Home order, you can pull up on Yeshuwa via Facebook, Instagram, Soundcloud and Youtube.  His hopes for not only his fans but everyone else out there is that you all keep your heads up through these tough times and don't forget, #ItsLikeThatCauseYeshuwaMadeIt.