Tales Behind the Creative, Episode 3: DOMMY 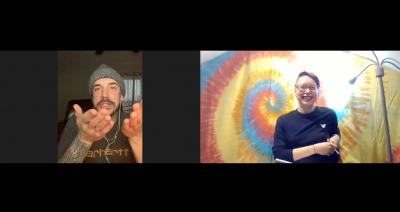 On the third episode of Tales Behind the Creative, we welcome local rapper, producer, videographer and owner/founder of Crew Life Productions, DOMMY. Having been in the rap scene for about ten years now, DOMMY (aka Dominic Ferrare) has been more focused on it within the last three. The majority of his time and energy lies in his production company which has been in existence for almost six years now.

When DOMMY was more involved with his music career, you could catch him performing at venues around the community like PACA, The Crooked I, Basement Transmissions (he was also the bassist in the local indie rock band, VWLKS), and in Pittsburgh where he had his biggest show headlining for hip-hop legends KRS-One and Rakim. Though he loved being intertwined within the rap/hip-hop community on stage and in the studio, he started to examine music videos with his friends and saw things that were lacking that he thought he could change for the better, hence the creation of Crew Life Productions.

He describes Crew Life as something that you love doing creatively with your friends/crew and his goal with the creation of the company is that all creatives can come together as one where everyone thrives as a whole. The production company is primarily comprised of DOMMY himself, Devon Heberle, and Kevin Sanchez (K Sanz) with Montana 300, Parrish Brown (P-Money), TayJer and Neimen being the artists that have exclusive video rights with Crew Life Productions. The most recent videos done by the crew are "Balling Remix," "Double," "Re Rock" and "Suicide Squad."

With the impact of the COVID-19 pandemic, DOMMY has taken a two to three-week hiatus from booking any video/photoshoots and has been taking the time to immerse himself in healthy and active ventures as well as spending quality time with family since we aren't able to be surrounded by our friends that we all miss so much. He also has more time to re-focus on his music career where he is collaborating with Chauncy Bill$Up on the beats for his tracks. He was also working with Bill$Up for about nine to ten months before the pandemic on a documentary that takes an in-depth look at the struggles that local rap/hip-hop artists go through on the daily.

DOMMY provides words of advice and wisdom in that he believes everyone should pursue their dreams no matter what anyone else thinks of them. There was once a time that people doubted his views but even from the negativity, he was able to produce a very successful and prominent company that is recognized by creatives both near and far. He also offers a helping hand to those who have any questions about cameras, editing, business and so much more. You can find DOMMY on his Facebook, Instagram, and Soundcloud and Crew Life Productions can be found on Youtube and all contributors can be reached via their Facebook page for any inquiries about general questions or bookings.