Symoné Crockett's talks with local musician (onewayness, The LEC) and man of many talents Adam Holquist as part of her ongoing live interview series 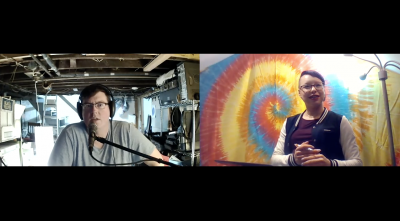 On the fifth installment of Tales Behind the Creative, we welcome environmental engineer, musician, and recent live streamer, Adam Holquist. Holquist, who created his own solo project titled onewayness, has been in the music industry for almost a decade now. He also has been the keyboardist in the local hippie hop band, The LEC since 2014.

Besides his own solo music project and being a part of The LEC, Holquist is also involved in an electronic duo titled, Embral where he creates music with Indianapolis, Ind. native, Charles Shriner. He is also the host of the Electroflux Experimental Music Series which is an ongoing show that follows local touring bands that perform at local venues such as Bastion Studios, Basement Transmission, The Erie Movie House and more. One of the most intriguing aspects of Holquist's life is that he is a former three-time winning champion on Jeopardy which was aired in 2013.

You Ought to Know: Adam Holquist

During the trying times of the COVID-19 pandemic, Holquist uses his time to chip away at older projects that he didn't have time to work on before the Stay-at-Home order was put into place. He also created a new live stream show titled, Social Distancing Variety Hour that is co-hosted by Michael "Fazed Cookies" Bennett and is aired on Facebook, Youtube and Twitch every Sunday night at 10 p.m. Besides these ventures, Holquist has also found solitude in spending more quality time with his family – which is in a way forced – but is still a grateful blessing in disguise.

Although he is missing the connection with his peers and the community – as well as being able to partake in helping his children with home school work – he prevails by utilizing his studio. No longer to assemble and disassemble his complicated setup, he's even honing new tricks such as live streaming. He passes along words of wisdom by telling others that this is a time to think of things that you may have never had the time to do so. These are times that many people will show their true colors, so it is up to ourselves to figure out what it is that will make us achieve our goals and to go out there and pursue them.

So, if you're interested in learning more about Holquist a.k.a onewayness, you can find him on Facebook and Instagram as well as listening to his music from his solo platform via Bandcamp as well as his duo project Embral and his band that he is involved in, The LEC.