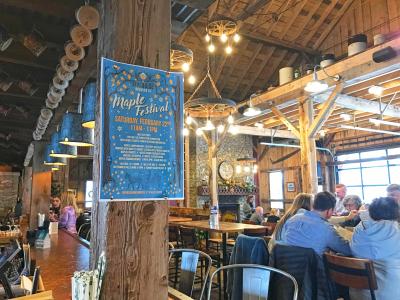 Way back in 1791 — in a letter to a pretty important dude named Thomas Jefferson — Philadelphia physician and U.S. founding father Benjamin Rush made a sweeping statement: "In contemplating the present opening prospects in human affairs," he wrote, "I am led to expect that a material part of the general happiness which heaven seems to have prepared for mankind will be derived from the manufacture and general use of maple sugar."

Another renowned early statesman and scientist, Benjamin Franklin, has been credited with this humdinger: "Beer is proof that God loves us and wants us to be happy."

The latter has since been proven to just be the stuff of folklore — Franklin apparently never actually said that on any record — but, hey, it's still a real nice (mis)quote for people who love their suds.

Nevertheless, put those things together, add in some real culinary flair and hearty live music, and what's there — for maple lovers, music lovers, and beer lovers alike — is something heaven-sent.

Along with a maple-centric feature menu, exhibits and demonstrations, RBC beer samplings (with proceeds to benefit the Cambridge Springs Volunteer Fire Department), horse-drawn carriage rides and a bonfire, the family-friendly festival will also feature live music by local and regional acts including Oldfish, Me & the Boy, Buttermilk Falls Gang and Johnny Bauer Blues.