Tech Watch: Is Erie Ready for a New Hotspot?

Access to wireless Internet has become commonplace in both the home and workplace, but when you step out into Downtown Erie, you enter a scattered world of pay-to-use Wi-Fi hot spots in exchange for buying a drink or meal - and limited public buildings with free online access. So, why is it that free wireless Internet access isn't more widespread in the city of Erie?

by Angela Kelly
View ProfileFacebookTwitterInstagramYouTubeGoogle+LinkedInRSS Feed
May 16, 2012 at 9:23 AM 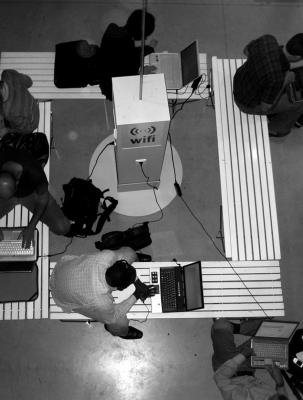 Go ahead and surf the net

Access to wireless Internet has become commonplace in both the home and workplace, but when you step out into Downtown Erie, you enter a scattered world of pay-to-use Wi-Fi hotspots - in exchange for buying a drink or meal - and limited public buildings with free online access. So why is it that free wireless Internet access isn't more widespread in the city of Erie?

In June 2011, the United Nations declared that access to the Internet is a basic human right. Although the report failed to draw a firm conclusion on the core issue, it did determine that blocking access to the Internet invades freedom of expression. Some U.S. cities are now providing free access to Wi-Fi. Most that provide access, such as Denver, Houston, Minneapolis, and Raleigh, use a mesh—a series of radio transmitters—rather than a hub and spoke, allowing each transmitter to communicate with at least two others. Each signal traveling from router to router creates a cloud of radio signals throughout the city, and residents of these communities have the ability to plug in wherever they choose to work, surf the web, and download media, all while on the move without receiving charges from their service provider.

But do the gains from offering free public Wi-Fi hotspots in Downtown Erie outweigh the charges and costs incurred when implementing the infrastructure?  Erie currently does supply free Wi-Fi, but only at Perry Square—reaching a limited portion of the city and providing hardly enough Wi-Fi for tourists visiting the sprawling city and region. With tourism as a leading industry for the city, a broader, free Wi-Fi network would allow people to use their smart phones without the risk of maxing out their data plan.

The basic idea of offering Internet access as a public service is sound, but there are several considerations that must be made. Issues begin to arise when cities fail to think of the Internet as a form of public infrastructure that—similar to subway lines, sewers or roads—must be paid for and maintained. Instead, cities have labored under the false belief that, somehow, everything could be built easily and for free by private parties.

As of April 29,the tech savvy city of Seattle decided to no longer offer services for free public Wi-Fi. Although the city was able to make it a technical success, the decision was made because their existing equipment had passed its "end of life" and could no longer be maintained effectively. In order for the city to install new commercial-grade equipment and continue supporting the Wi-Fi service, they would be forced to make budget cuts or increase taxes. Ultimately, the update was too costly for taxpayers to be expected to bear, causing the city to discontinue offering the free service, leaving some residents appalled.

This example raises concerns that must be well thought out if Erie considers adding more hotspots for a citywide free public Wi-Fi initiative. If a city owns the network, then it has an unfair advantage against private businesses. Phone and cable companies have been pushing for state laws to block or prevent municipalities from offering Wi-Fi or broadband services, including the state of Pennsylvania. According to muninetworks.org, Pennsylvania has a barrier where "communities may not provide broadband services unless the local telephone company has refused to provide the requested speed - regardless of the prices charged."

While not "free," another option would be subscription-based Wi-Fi in the city. The problem with a subscription is that potential subscribers might not see the value in paying for another service when they have a data plans on their mobile.

Providing more access to the Internet, as well as a better connection, is a national priority that is seen by local governments as the key to enhancing quality of life. Based on other initiatives across the globe, creating free public Wi-Fi will not be an inexpensive feat. But chances are city dwellers won't be able to get high-quality wireless Internet access for free, unless there is both public and private businesses coming together in support. If our city can strategically plan additional hotspots downtown, perhaps using the GAF Property to test out the success, then we can help grow business by encouraging tourists and locals alike to check the web and see local deals or events. Until then, all we can do is use the currently provided Wi-Fi from private businesses, and at Perry Square, with the hopes that free public Wi-Fi can be accessible in the near future.

Epic WebStudios can be reached at epic@eriereader.com