The twin sisters roll through Meadville for the second stop on their latest tour. 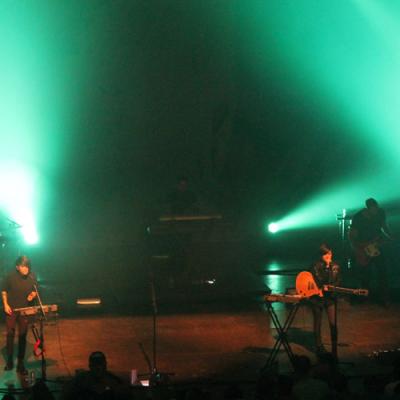 By all accounts (their own, too) Tegan and Sara – long-known and loved amongst loads of hipsters and other cool cats for their close-to-the-bone, intimately-conversational brand of indie rock – have been floating their boat up and down distinctly more mainstream channels these days.

Erie Reader contributor and music wiseman Alex Bieler put it right when he put it like this in his review of their seventh album, Heartthrob, early last year: The twin sisters out of Canada, he said, have certainly veered into that "feared territory" that is radio- and dance-club-ready pop – and sure, maybe that scares some of their older fans – but, hey, they "shouldn't be scorned for the fun and accessible" music they've been making.

It's a new sound that happens, Bieler said, when Tegan and Sara "meld their already-catchy indie-pop style with a fair bit of '80s keyboards ... tracks that are more polished, but still true to [their] aesthetics. [It's a] natural evolution of the duo."

It felt that way, and sounded it, too, when Tegan and Sara played one of their first concerts of the year – a big, bright mix of all their indie-rock-power-pop-synth-wave sound – at Meadville's Allegheny College on Feb. 8. And that night, most everyone inside the Allegheny Campus Center's auditorium – a packed, veritable sea of true-blue fans with fresh-off-the-merch-table T-shirts – seemed right where they wanted to be.

Before making the snowy trek out to the show, I came across an article on their album, Sainthood, in which Spin magazine wrote: "Tegan and Sara's music may no longer be stuff of teens, but its strength remains in how much it feels like two people talking."

Now, I agree that Tegan and Sara's music does feel indeed like two people talking, and there's some strength in that, to be sure. Beyond that, they still, and always, converse a lot – signaturely warm, engaging little in-between chats.

And man, that crowd at Allegheny was hanging tight onto every word.

"We're very excited to be here," one of the sisters said between one of their hyper-driven, mass-cheers-invoking opening numbers. "We're counting [this] as our second show of 2014 ... [and] you guys are already such an awesome crowd."

But on Spin's other point, I've decided I have to differ: At 33, Tegan's and Sara's stuff, it seems, is still very much the stuff of teens, and the teens I saw seemed to love it.

"WE LOOOOVE YOOOOUUUU TEEGAAN!!!!," I heard some kid up in the balcony scream, all heart-out.

I looked up toward the voice, and saw a group of kids, one of many clusters in their mid-teens or not much at all older, a mixed bag of boys and girls. And they're way, way into it, with frantic-excited, faces like those crazy-made, blown-away kids on old footage of The Beatles performing.

"I remember that," I thought as I looked up. That first-concert kind of feeling, that WOW-I-can't-even-handle-it feeling you got at that first real, big show you went to as a kid.

For me as an awkward, mulleted, thick-spectacled high-schooler, that moment first came in 1995, when I made the hours-long pilgrimage from the backwoods of Kane to see pop-metal wizard Ozzy Osbourne performing in Erie.

And it was amazing.

I feel blessed, truly, that I've not forgotten that feeling. And real gratitude, too, that there have been so many, many more amazing sounds, sights and moments since way back then.

For a lot of the kids, that first-time moment looked to be coming from seeing Tegan and Sara playing at Allegheny a couple of weekends back.

And from where I was watching, it looked amazing for them – the kind of thing they'll never forget.

In my book, and whether I'd call myself a fan or not, any music that can do that for someone, anyone – no matter what sound it takes or makes – is something, and that thing's always somehow good, and real, and true.