A short history of roller derby... 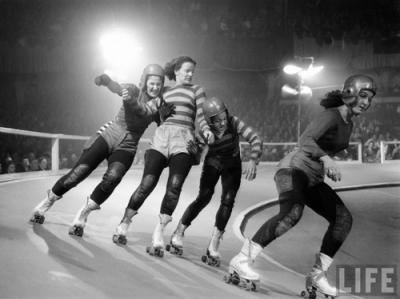 More derby! This is the longer version of roller derby history from an earlier draft.

Roller skating goes all the way back to the eighteenth century, but really took off in the 1800s when skates were mass-produced and the first roller skating rinks appeared. Roller derby came later in the 1930s as a spin-off of a traveling marathon roller skating troupe put together by a promoter name Leo Selzer. During the grueling days-long races between male-female pairs of skaters, Selzer mixed in short five-minute sprint races for cash prizes called "jams." The jostling and pushing during these races was so popular with the crowds that Selzer designed a sport around it, splitting his skaters into teams and giving out points to designated skaters – jammers – for each opposing skater they lapped on a banked track. Essentially, he wrote the rules for roller derby. It worked; millions came out to see Selzer's traveling exhibition.

In the late 1940s and 1950s, Selzer's roller derby became televised. Selzer formed the National Roller Derby League and bouts appeared on CBS, ABC, and NBC, and he formed and re-formed teams in different cities – the most of which were the San Francisco Bombers. Perhaps due to overexposure, or that a sport that prominently included women wasn't considered "legitimate," interest in roller derby dwindled in the 1960s, and by the mid-1970s was essentially dead.

Selzer's roller derby was circus-like, a rolling brawl filled with flying elbows and skaters pushed into, and sometimes over, railings. It was mostly phony – watching video of 60s-era Bombers bouts is like watching modern professional wrestling. Other leagues that were started in the years afterward tried to emulate Selzer's model of television-funded hyper-violent bouts, culminating in a short-lived 1989 heavily-scripted television series called Rollergames, which featured spandex, fist fights, and an alligator pit. But nothing every really caught on.

A full episode of Rollergames...

It wasn't until 2000 in Austin that roller derby's revival got going – but not as a (relatively) high production effort with a fancy banked track and costumes. Instead, a bunch of women got together and decided they would do roller derby. They paid for the equipment and track time with their own money, they taught themselves how to play. They had bouts, and people came to watch them skate.