Impressive albums from area musicians you might have missed

by Nick Warren
View ProfileTwitterInstagramRSS Feed
January 1, 2020 at 11:30 AM 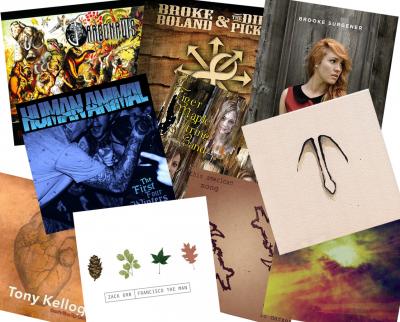 There's a lot of Erie music out there. Over the years, the Reader has been happy to feature a small portion of it. Here's a sliver, in chronological order, of some of the proper full-length albums that weren't on our year-end lists (find those below too). Special thanks to the Erie County Public Library's Local Music Project for their catalog of releases. Many of these can be found on the second floor of the Blasco Memorial Library. They are always accepting submissions, and each artist's page is always accepting purchases.

Zack Orr – Fransisco the Man (2010) — Orr's definitive release sounds like it could have come out today. A finely crafted concept album with a track for every month of the year, it's an epic 72-minute indie masterpiece.  Listen on Spotify, iTunes, and at zackorr.bandcamp.com

Jargonauts – Cut the Music (2011) — A spacey sonic excursion from the twisted minds that brought you Pegasus Unicorn. The unfortunately defunct group was responsible for some of the most delightfully weird, exquisitely inspired local music ever.  Listen on Spotify, iTunes, Google Play, and more

Matt "Broke" Boland – Infinite Chaos (2012) — After his time with the Dirty Pickles, and before his work with Potwhole, Matt Boland went "Broke." One of Erie's hardest-working musicians put together a politically-charged album after spending time in New York's Occupy Wall Street movement, filled with lively storytelling. Listen on Spotify, iTunes, and at brokeboland.bandcamp.com

Brooke Surgener – Brooke Surgener (2013) — Before she started putting out exquisite – and often hilarious – cosplay videos, Brooke Surgener had a much more traditional folk sound. It's showcased perfectly here on these 11 tracks as the multi-instrumentalist songwriter pours her heart out with catchy ease. Listen at brookesurgenermusic.bandcamp.com

Jack Stauber – Viator (2015) — In case you're not aware, Jack Stauber is one of the most successful artists to ever come out of Erie (his Spotify numbers are at over 4 million monthly listeners). Stauber started out in Edinboro fronting bands like Joose, and releasing sparse bedroom-folk albums like the 35-track Viator, paving the way for the Pittsburgh-based songwriter's future neo-psychedelic forays and video projects. Listen on Spotify and at jackstauber.bandcamp.com

Tony Kellogg – Don't Give Up on Love (2015) — This year, Tony Kellogg embarked on a 365-day journey of original songs. For day #365 Kellogg was joined by his family for a special version of this album's title track. It makes sense, as these inspired acoustic folk anthems truly stay with you. Listen on Spotify, iTunes, and at tonykellogg.bandcamp.com

Human Animal – The First Four Winters (2016) — One of the local powerhouses carrying the torch for Erie hardcore, Human Animal have the pedigree and dedication to be trusted on the subject. A collection of the band's early vinyl splits and first EP, The First Four Winters, stands together on its own to show listeners why they're one of the most important parts of the scene.  Listen at humananimal.bandcamp.com

onewayness – Vigil (2019) — In addition to providing keyboard to The LEC, Adam Holquist is a fairly prolific ambient drone artist known as onewayness. Holquist has put out 24 full-length recordings since 2012. Vigil: Live on Star's End is his latest work, a sometimes-soothing, enveloping textural experience in five sections. Listen on Spotify, iTunes, and at onewayness.bandcamp.com

While we're on the subject, here's what we highlighted as the best local albums of years past.

2015: Barlow – Barlow, Sean-Patrick and the Newgrass Revolution – About Time, Tyler Smilo – Dust in a Grave

2016: Maddock – It's Drowning Out, One If By Land – Nobody Wants to Leave, Bigg Wash – Infinity Gems