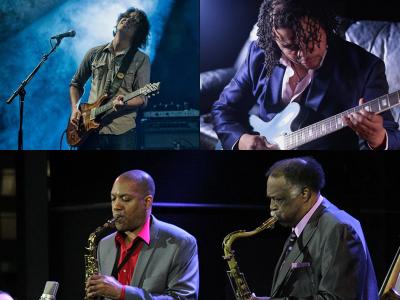 Traditionally speaking, blues and jazz music have always been about locking into a groove and the present moment, embracing the real and the real-time. For nearly three decades, Erie's Blues and Jazz Festival had been like that too — early August, Frontier Park, world-class musicians, and big turnouts were as predictable as a metronome.

But for the past two years, COVID-19 has thrown off the beat — the 2021 Blues and Jazz Fest was delayed by several measures into late September, and the 2020 edition was canceled altogether. It's been decidedly avant garde territory as of late for this warmly familiar community standard, but we are pleased to report that 2022 will be a return to form.

The 30th Erie's Blues and Jazz Festival is back in its usual early August slot, featuring a full weekend of music and activities. As per tradition, Saturday will have a bluesier slant while Sunday will lean much jazzier, but there is and always has been plenty of overlap and cross-pollination between the two genres. Also continuing the custom of more recent years, Friday evening will play host to artistically and culturally edifying events.

Here's what's on tap for the weekend at Frontier Park. — Matt Swanseger

7 to 8:30 p.m. — Find your rhythm; join in a drum circle led by Lynn Johnson on behalf of the Erie Dance Consortium.

8:30 to 10 p.m. — Immerse yourself in the history of the blues with a double feature presented by the Film Society of NWPA. W.C. Handy's 1929 short St. Louis Blues will be followed by Deep Blues: A Musical Pilgrimage to the Crossroads, which examines the Mississippi Delta's role in cultivating the genre.

Noon to 1:30 p.m. — Erie's Best New Band (as voted in the 2021 Best of Erie Awards) gets the party started in fashionably funky style. Phunkademic derives its sound from the scene's pioneers (Parliament/Funkadelic, The Meters) and today's trailblazers (Lettuce, Cory Wong & The Fearless Flyers) with an irresistible energy.

4 to 5:30 p.m. — Melding Afro-Caribbean, worldbeat, and Latin musical traditions, One World Tribe is the epitome of "musical melting pot." The Jazzfest regulars will be accompanied by West Indian Revelation, a rotating cast of musicians and performers anchored by core members Adrani and Calvin "Fuzzy" Samuel.

6 to 7:30 p.m. — Since first blazing into the blues landscape in 2007 with his then-band Back Door Slam, guitarist Davy Knowles has maintained a regular presence atop the Billboard Blues charts, most recently with his 2021 solo release What Happens Next, a soulfully nuanced departure from his musical bread and butter of high-octane blues and Americana.

8 to 9:30 — You might think that Saturday's headliner, Grady Champion, would've gotten lost in the shuffle as the 28th of his preacher father's 28 children. However, that's not at all the case, as the Mississippi-born singer-songwriter, multi-instrumentalist, and producer has managed to shine brightly among his blues peers, highlighted by a Grammy Award for Etta James' cover of his song "Trust Yourself" in 2003.

2 to 3:30 p.m. — The 40-year career of Cat's A Bear has been nothing short of prolific — since 1982, core members and co-founders Frank Singer (guitar/keys) and Joe Dorris (drums/vocals) have released over 20 albums, inventively reinterpreting jazz standards. Nick Ronzitti (congas) and Joe Frisina (bass) round out the current lineup.

6 to 7:30 p.m. — Buffalo-based Sol Y Sambra knows how to crank up the heat. For 15 years preceding the pandemic, they were the Saturday night house band at the Anchor Bar, better known as the birthplace of the Buffalo wing. The sextet, led by pianist and arranger Kevin Doyle, tantalizes with their tropical fusion of the Latin and American jazz traditions, sauced up with a progressive flair.

8 to 9:30 p.m. — Call it coincidence or call it fate, but saxophonists Eric Person and Houston Person — totally unrelated and nearly three decades apart in age — first took the stage together in 2009 and have been a dynamic duo ever since. The elder Houston has a whopping 70 album credits to his name, most recently lending his talents to Eric's Blue Vision, an appropriately blues-inflected set of mostly originals. Any person(s) in the vicinity of Frontier Park will want to be on hand to experience two virtuosos in Person2Person.