The Big Mean Sounds of Tomorrow

Two powerhouse groups are about to fill the downstairs of the King's Rook Club with sound.

by Nick Warren
View ProfileTwitterInstagramRSS Feed
April 11, 2018 at 10:00 AM 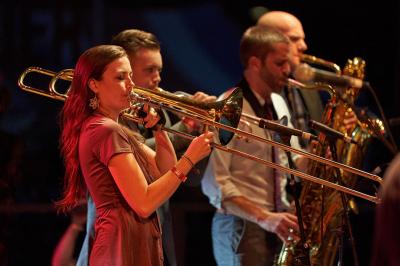 Two powerhouse groups are about to fill the downstairs of the King's Rook Club with sound. Ithaca, New York's Big Mean Sound Machine and Rochester's Danielle Ponder and the Tomorrow People will be splitting the bill.

The latter features the spectacular vocal abilities of diva frontwoman Danielle Ponder. At her first appearance in Erie, audiences watched, spellbound by her amazing voice, as her backing band pumped out original soul tunes. This will be her first time in the larger downstairs complex.

The headliners are a big band with a big sound — after all, it's right there in the name. Big Mean Sound Machine is a afro-funk party band with a lineup between eight and thirteen members, depending on the performance. With a full horn section and plenty of percussion, the band brings a danceable, infectious groove that invites audiences to the dance floor, and released their fourth full-length album last year, titled Runnin for the Ghost. — Nick Warren