The Bunny The Bear Crosses Up Basement Transmissions

Buffalo, N.Y. group The Bunny The Bear have created a unique style of music that artfully blends elements of metalcore, electronica, and synthpop. 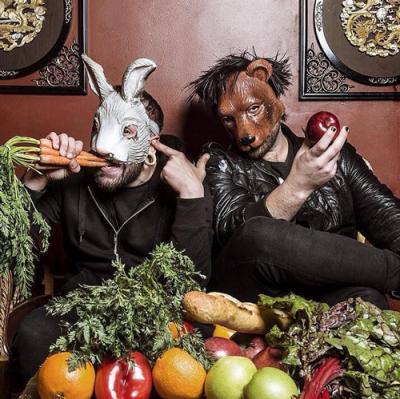 Experimental music can be difficult to define. Slapping a genre tag on it doesn't really help clarify the term. Experimental rock, folk, jazz — what exactly is being experimented with? Song structure? Instrumentation? Genre fusions? All of the above? That's where Buffalo, N.Y. group The Bunny The Bear steps in.

The Bunny The Bear, whose name comes from the nicknames of the two founding members, Matthew "The Bunny" Tybor and Chris "The Bear" Hutka, have created a unique style of music that artfully blends elements of metalcore, electronica, and synthpop, refusing to tie themselves down to just one genre. The band is often lumped in with the "post-hardcore/experimental metal" scene. Other bands in their field have experimented with the two vastly different genres, but few have gone as far as TBTB. The band's earlier work draws a clearer line between their metal and electronica influences, featuring an equal representation of both genres' typical instruments. In contrast, much of their recent work downplays their metalcore influences in favor of synth-pop instrumentation, but the band does this to great effect. It's often difficult to tell whether it's an electro synth-pop group experimenting with metal or a metal band experimenting with electronica instruments.

Opening for TBTB are up-and-coming Erie metal acts Of Shadows, Raven's Law, Verutum, and Familiar Dark, all eager and ready to make a mark on the local scene. — Tommy Shannon