The Cure for Aimlessness

It all started when Kristen Wright's dad handed her a bow... 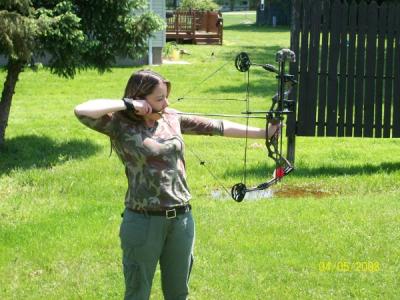 As a child, I ate so much venison harvested in Crawford County and fish caught from Lake Erie that I swore them both off for life, regardless of where they came from.  In my late teens I decided not only to rescind that decision, but also to become a participant in the hunt itself.  I attribute this change of heart, in large part, to my discovery of the literature of Thoreau and Emerson.  I started to believe that humans had become so dependent on outside forces for identity and artificial means for basic survival that few of us would desire much less tolerate a week in the woods.

I longed for a sense of self-reliance, so I decided to pick up a rifle and hunt.  Even now, I cringe at what feels, at least to me, a kind of contradiction.  Climbing into a deer stand with a rifle, I felt an unfair advantage over the game I sought.  With every effort to assimilate into a natural environment, the gun felt alien to me, cumbersome and uncouth.

Those who have never hunted may already find my story barbaric, but I can assure you, nothing is further from the truth.  Something about engaging in the hunt humbles you like nothing else can.  Your senses become so finely tuned that you suddenly realize your own physical limitations while simultaneously recalling your significant place in a design greater than your own understanding.  Perhaps I sound sentimental or downright foolish, but even words have their limits, and I suspect most hunters—though they may not openly admit it—can relate to this experience.

After lamenting my continued lack of success with a rifle and feeling rather odd toting one around in the first place, I became interested in archery.  My dad, who has always encouraged my attempts to hunt, decided to give me his bow, a Fred Bear compound bow from the early 1970s, but the draw was set at 55 pounds, and I didn't have the strength for it.  The solution: seek inspiration and advice from experienced bow hunters.

I checked out Eugen Herrigel's Zen in the Art of Archery from the library, and started reading the German philosopher's account of his own six-year experience in Japan where the time-honored tradition of archery is not understood as a sport, but "a religious ritual" in which "the hitter and the hit are no longer two opposing objects, but are one reality."  I quickly realized I was exploring something far more profound than a simple pastime.

Inspired and hopeful, I ventured out to visit my friends Jen and Andy Skinner. Andy's obsession with bow-hunting is evident upon meeting him.  He is a member of the Pope and Young Club, an organization dedicated to conservation and ethics.  He uses trail cameras to survey the land he frequents, evaluating population density, the age structure of the herd, and doe to buck ratio.

I explained to Andy that I was writing an article on my foray into the world of archery, and I felt rather embarrassed when I admitted that beyond acquiring a skill, I hoped for a sense of spiritual fulfillment, a natural sense of union with my environment.  He responded with his own story, a characteristic of communication between hunters I've come to recognize in my own family.  The experience speaks for itself—the significance of the experience is left for the listener to interpret.

Andy told me of a time about 16 years ago, when he was a teenager acquainting himself with the hunt. Without a tree stand, he climbed an apple tree and assumed the watchful stillness of the hunter.  This stillness, this sense of being an unmoved center in a bustling, vibrant universe, is something that readers who hunt will understand.  In this stillness, a chipmunk can sound like a barreling buck.  Andy was spooked by a woodpecker landing and tapping on his boot. No one is going to believe this, he thought. From that day on, he has never forgotten to bring his camera into the woods, often reacting to the wildlife he encounters by shooting a picture rather than an arrow.

Looking over my dad's old bow, Andy suggested I stop at Outpost Archery to ensure it was safe before adjusting it to shoot.  A bit disheartened by the delay, I went straight to Outpost to see what needed to be done.  The owner, Chris Snyder, kindly looked over my bow and assured me it was ready to shoot.  The problem was not safety; the problem was size.

The draw length, a measurement determined by the length of one's arms, was 30 inches—too long for me.  I was faced with a decision: invest in a bow suited to me and make the commitment to acquire and develop the skills necessary, or let my frugal nature get the best of me.

I called my dad and delivered the news.  The thought of dropping damn near $500 is not something I take lightly. Factor in the fact that I don't get a steady paycheck for the four-month duration of summer.  Oh yeah—did I mention I had yet to shoot a bow? Ever.

I decided I needed to shoot a bow I could actually draw.  I needed to feel at peace with this instrument.  I went back to Outpost and said, first thing: "I have never shot a bow, man." They were quite willing to accommodate my curiosity.  After a few practice shots on a bow better suited for me, I was ready to make a commitment, something, quite frankly, I am not wont to do. Technology has changed everything, and this new bow is good lookin'.  I grew smitten.

Chris patiently worked with me and adjusted my new Hoyt Ruckus so it was fit for my specific dimensions and ability.  He explained the three things I need to always keep in mind: anchor point, form, and trigger pull. At first I had a funky stance, sticking my butt out, afraid to put my face into the draw.  Chris modeled his own stance for me, explaining I had to get my face into it.  By the third draw I was tired of being shy.  I drew the bow, gazed through the site, held it, and pulled the trigger on my release.  BAM! I started getting closer and closer to my target.

With each shot I felt my confidence grow.  At one point I let out hoot and did a little dance. Experienced bow hunters  at the range welcomed me to the club.  A few gently offered advice. And I have found a new joy, a new love. After just an hour of shooting with a 30-pound draw at 10 yards, I was able to get a grouping, my arrows all hitting within a five-inch radius. I sensed a consistency in my shooting as I grew more comfortable, smooshing my nose into the drawn string as I found my anchor point and gazed through the sight.

With the purchase of my bow, I received a six-month pass to practice at the range.  Regular practice is essential to bow-hunting; the importance of accuracy and consistency cannot be overstated. I am thrilled and determined to apply every effort.  My goal is to be accurate within 25 yards with a 40-pound draw by early October when I venture into the woods to enjoy the privilege of the hunt.

The words of Aldo Leopold echo in my mind: "The outstanding scientific discovery of the twentieth century is not television, or radio, but rather the complexity of the land organism. Only those who know the most about it can appreciate how little we know about it." I am ready to be a humble and insatiable learner, an eager pupil in the great outdoors, an archer with an open heart.