Coming from a group that has dabbled in verbose musings into anything from Japanese folk tales to sea shanties, a simple, more relaxed release almost seems odd, but the results generally work.

by Alex Bieler
View ProfileFacebookTwitterInstagramGoogle+RSS Feed
February 4, 2015 at 4:40 AM 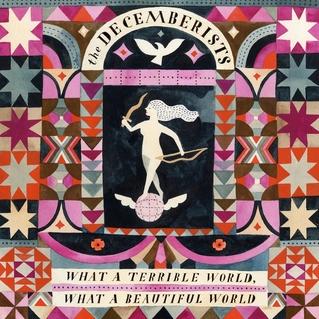 What a Terrible World, What a Beautiful World

The Decemberists are a band that usually ties overarching themes to its albums, but latest album What a Terrible World, What a Beautiful World doesn't dwell on any subject for too long. Coming from a group that has dabbled in verbose musings into anything from Japanese folk tales to sea shanties, a simple, more relaxed release almost seems odd, but the results generally work. Lead single "Make You Better" is a wonderful trip into a '70s-lounge style, spiked with an enjoyable rousing chorus. If there is a slight theme through the new album, it's a focus on the band itself, whether Colin Meloy is jokingly singing of how music impacts fans on "The Singer Addresses His Audience" or a remark back on past tracks on "Anti-Summersong" ("I'm not going on just to sing another sing-a-long suicide song"). The former song and ends well, but the latter sounds cloyingly sweet, a sense that pervades a handful of songs and puts a damper on an otherwise enjoyable album.

the decemberistswhat a terrible world what a beautiful world