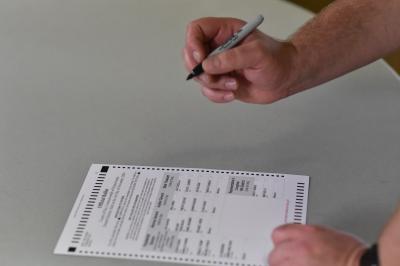 The only thing that might've made the night of Nov. 3, 2020 feel any longer would have been if Daylight Savings Time ended Tuesday night rather than Sunday, Nov. 1. On the lead-up to the 2020 Presidential Election, many anticipated the results may not be known before we turned off the TVs, logged off Twitter, and turned in for the night, but with major polls, pundits, and prognosticators pointing confidently to a Biden victory, some were holding out hope we'd know the outcome early. Even FiveThirtyEight claimed the election walked a "fine line between a landslide and a nail-bitter."

At the time of filing this update, we still do not know the outcome between President Donald Trump and Vice President Joe Biden. Florida stayed red and Texas didn't flip, two states that Trump needed on a path to victory and two states that – had Biden won them – would've proved landslide over nail-bitter.

Eyes fixated on early results were watching those states. And Ohio. And Arizona. And North Carolina. And Georgia – which is still in play.

At 12:27 a.m., New York Times columnist and bestselling author David Brooks tweeted "Suddenly the Times needle is tilting Biden in Georgia." Being reminded of watching the grossly inaccurately prediction of the NYT needle from 2016, your dear writer, dear reader, couldn't help but hear Neil Young's "The Needle and the Damage Done" reverberating in his head.

But alas: Georgia remains up for grabs as ballots are being counted.

As does Pennsylvania. But that was to be expected.

The Keystone State only recently introduced no-excuses mail-in voting. In the weeks and months leading up to the election, many cautioned to have patience when it comes to Pennsylvania.

So, at the time of filing this report, at 5 p.m., Wednesday, Nov. 4, 2020, let's look at what we do know and what we don't when it comes to several key races in the Erie, Pennsylvania area, leaving analysis and coverage of broader elections at the federal, house, and local levels to future coverage.

What We Do Know Now:

What We Don't Know Yet: