The Kids Are Alright: A Call to Support All-Ages Venues In the Community 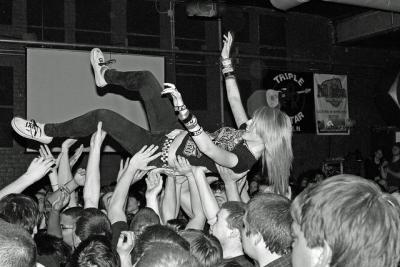 Not the movie, mind you, but the grindcore powerhouse of the early 2000s.

I'm thinking about them playing The Hangout, and me, all of thirteen years old, getting my ass absolutely handed to me in a mosh pit. I'm thinking about sitting on the curb outside the venue drinking a Jones cream soda while the cool kids smoked cigarettes and the straight-edge scenesters shot them glares.

There were years of it, years of hardcore music and straight-edge lifestyles. Skipping out on any obligation just to catch your friend's band lay down a set at Forward Hall. Everyone had some stake in the scene, if only for the fact that it made them feel not quite so alone. There was a community, entirely made up of minors, small coalitions of local bands, kids that practiced in their parent's basements.

And at the end of the day they had somewhere to show off their sound. Virtually anyone could get booked at The Hangout or Forward Hall if they committed to their involvement in the scene. In spite of this relatively easy access, playing shows at these venues was further incentivized by the fact that big-name bands like Every Time I Die and Between the Buried and Me occasionally rolled through as headliners. It was a big show like that—the aforementioned The Devil Wears Prada set—that brought me into the scene and ultimately kept me coming back.

This sounds like a nostalgia trip, but there's something more to it. Those bands are all but burnt out now, and those venues are closed, but they represent an important stage in the life cycle of Erie's local music scene. Those days were foundation. The kids that got their asses kicked at those shows went on to start their own bands, host their own shows, record their own demos. I'm one of those same kids—now in my twenties—who got inspired by the few creative outlets we could find then.

And that's what it was – the fact that we had those creative outlets. There was a time not too long ago where kids didn't have anywhere to go. Without venues like The Hangout or Forward Hall, there was no place for minors to get together and support each other's creative undertakings. This isn't to say that in the absence of our all-ages venues kids stopped making music all together, but for a time it was tough.

But there's always heart, and there's always a certain tenacity to be found in kids who are really dedicated to making music. Without all-ages venues, minors in the community took to hosting modest shows in their basements, organized via Facebook groups, and spread out all over the city. And in the end, it was that sort of commitment to creative expression that spawned Basement Transmissions, the first legitimate all ages venue to hit the Erie scene in years.

The venue has since moved from its original State Street location, and is currently enjoying a significant amount of success at its new home in the old Roadhouse Theater on West 11th Street. Basement Transmissions has been host recently not only to a plethora of killer local acts, but has also pulled headliners like Tantric. Even more than this, the venue's owners and patrons have displayed an ongoing commitment to building an environment that is dedicated to fostering the creative development of our city's youth.

This is an absolute necessity. All-ages venues in the vein of Basement Transmissions are crucial to sustaining the continued growth of our city's music scene. If you make outlets like these available to minors, you start an early process of creative development that goes on to stimulate the cultural growth of our region.

For evidence of this, one could easily look to the Pittsburgh music scene as a shining example of what this sort of progress can produce. With a wide range of all-ages venues to select from—a few of which even feature bars to cater to of-age patrons—the young musicians of the greater Pittsburgh area have developed a scene that is continually producing new and provocative sounds.

And Erie can do the same. As it stands now, our city is well on its way to developing a musical community that the youth of our area can rely on. So long as those involved in our local arts and culture continue to show the amount of support and participation we've seen in recent years, we'll continue to see a flourishing of local talent.