It's the final curtain call for Rocky Horror

by Nick Warren
View ProfileTwitterInstagramRSS Feed
September 27, 2017 at 11:45 AM 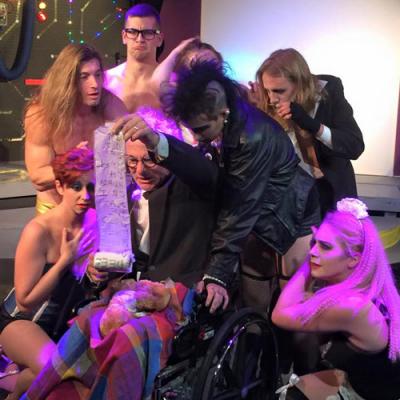 First, let's clarify that misleading headline. This is not the Rocky Horror Picture Show, this is the Rocky Horror Show. Richard O'Brien's cult classic stage production, which continues to inspire generations of new converts year after year, is coming back to the Performing Arts Collective Alliance for its third and final year. Having sold out every performance over the last two years, PACA is looking to fill its pews once again. This shouldn't prove as difficult as your run-of-the-mill play, however, as multiple viewings come with their own benefits, as well as exposing guests to the show's very own lexicon.

Having sold out every performance over the last two years, PACA is looking to fill its pews once again.

Audience members are encouraged to participate, shouting "callbacks" during the show, and employing props during key moments. PACA will be providing special goodie bags for just such an occasion (no outside props will be permitted, however), and a chorus of "popcorns" will be assisting in some of the show's best-loved quips.

Now a full-fledged Broadway hit, the musical first appeared in London's Royal Court Theatre in 1973. The film came out in 1975 (that's specifically the Rocky Horror Picture Show we were talking about), and remains the longest-running theatrical release of all time. The popularity of the film was thanks to special midnight showings, which gave birth to an entire community of fans. In addition to the callbacks, costumed actors will perform "shadowcasts" along with the film. Devoted fans pride themselves on having seen the film hundreds, if not thousands of times. Repeat guests of past PACA performances will be treated to an experience in a similar vein to previous shows, with some key exceptions. The roles of Brad Majors and Janet Weiss will be played by PACA first-timers (but no strangers to local community theatre) Michael Hipwell and Jessie Thorpe. Each actor brings a unique energy to their roles, while both being excellent singers. Dr. Everett Scott will be played by Jeff Lipiec, whom PACA fans will remember as Dr. Hannibal Lecter in last year's production of Silence: the Musical. The story's narrator will be portrayed by Annie Rosenthal, with Michael Weiss filling in for selected performances.