The Lasting Impact of Bernie Sanders

A short look back at Sanders in Erie, what he symbolized, and the important shift he made in American politics 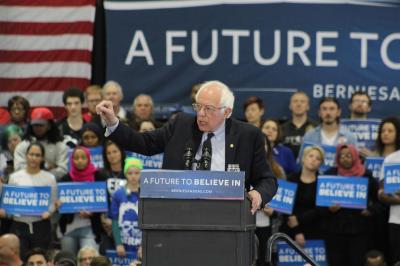 On April 8, Bernie Sanders announced he was dropping out of the 2020 presidential race.

He began by informing members of his staff, with the news quickly breaking across the country, a live address starting just before noon. Word quickly spread on social media, carrying a wide range of sentiments. Amid calls for party unity and suggestions to still write him in, most reactions held a mixture of anger, sadness, and frustration.

Bernie Sanders wasn't your average political candidate. For millions of people, Bernie symbolized an earnest hope. Though Obama ran on a campaign of "hope and change," Bernie seemed to shoulder these ideals in his own, revolutionary way. His campaign's progressive ideals shifted the political conversation in dramatic ways, making things like universal healthcare, college loan forgiveness, and fair banking practices issues that had to matter for every Democratic candidate. In words from his website, his goal was to "achieve economic, racial, social and environmental justice for all."

For many, this hope was held onto for more than four years. To those who ardently supported him in his primary run against Hillary Clinton in 2016, he became a reassuring presence to look forward to in 2020. After Trump's election, and years into his presidential term, Bernie backers clung to their candidate even harder.

Below is a photo gallery of Bernie Sanders' 2016 visit to Erie at the Bayfront Convention Center.

In each election, he did amazingly well. Taking an early lead in February of 2020, Bernie became the frontrunner for the Democratic nomination. Then nearing Super Tuesday, as candidates like Pete Buttigieg and Amy Klobuchar dropped out, the party seemed to be rallying around former Vice President Joe Biden.

Despite this, Sanders was still winning delegates, earning top spots in North Dakota, the Northern Mariana Islands, and for Democrats Abroad between March 3 and 14.

Then, COVID-19 happened. Elections on March 17 saw Biden claim big victories in Florida, Illinois, and Arizona. On April 7, the Wisconsin primaries took place, despite large public outcries for a postponement. As national attention shifted to the ongoing pandemic sweeping across the US, many speculated on how both campaigns would function during this crisis.

The day after Wisconsin, Bernie made the decision to suspend his campaign.

With Sanders out, this will essentially assure Biden's nomination to face Trump in the upcoming election. With the ever-increasing divide in the Democratic party, many voters are conflicted about Biden, recalling reactions to Clinton in 2016.

In that election, Bernie received 46.97% of the vote in Erie County to Clinton's 52.17% – or 18,362 to 20,395 votes. By the time Pennsylvania's late-in-the-game primary election took place on April 26, Clinton was already gaining substantial ground. Bernie's campaign went on into that summer though until he formally endorsed Clinton on July 12.

If Pennsylvania's primary was not postponed until June 2, voters were set to go to the polls on April 28.

The ideals that Bernie came to symbolize will likely carry on for generations. Thanks to his devoted supporters all over Erie County and throughout the US, Bernie Sanders will continue to be an important, lasting figure in the political landscape of America.

Despite his last name, Nick Warren intended on voting for Bernie Sanders in 2020, as he did in 2016. He can be reached at nick@eriereader.com

Check out this  video from local musician Nicholas Nasibyan chronicling the life of Bernie Sanders.