The strength of the Mountain Goats will always rest solely on the shoulders of John Darnielle. His brilliant lyricism and idiosyncratic vocal delivery tells a story like no other living person can. 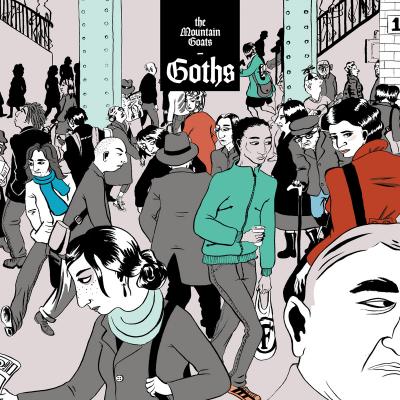 No comped vocals. No pitch correction. No guitars." That was what heralded *Goths, the 16th studio album from the Mountain Goats. If it wasn't for that declaration, it might take the listener some time before they even realized that. While the musical presence of saxophone player and  multi-instrumentalist Matt Douglas is becoming a more and more identifiable part of the band's sound, overall it's not a radical departure for the band musically, and it doesn't need to be. The strength of the Mountain Goats will always rest solely on the shoulders of John Darnielle. His brilliant lyricism and idiosyncratic vocal delivery tells a story like no other living person can. Not unlike the band's last album *Beat the Champ*, this is an album with a theme. While in 2015 it was wrestling, the theme of *Goths is, well, goths. The record quickly namedrops Andrew Eldritch (singer of The Sisters of Mercy), and Robert Smith (of The Cure) in "Abandoned Flesh" along with plenty of direct references to dozens of bands. Despite its subject matter, there's so much life in Darnielle's work.
– Nick Warren