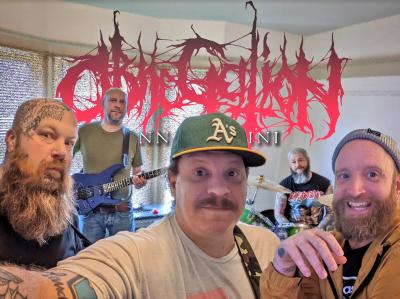 There's an Erie band headlining a sold-out event in New Kensington, Pa. called SincerityFest. That band? Abnegation. Old-school Erie hardcore fans may rejoice now — Human Animal is on the show too. Formed in 1992, Abnegation became well-known in the scene, and their music has been rediscovered for decades by eager HXC (shorthand for hardcore) acolytes.

Just in case you didn't yet get a ticket to SincerityFest, I would advise you to pop over to The Bunker at Lavery Brewing Co. (irony noted) on Friday, May 27. Mala Sangre, Maniacal Device, and Shiver will be playing the show with Buffalo band Juggernaut. If you're there, you might just be able to catch a special set from Abnegation, with their mid-'90s lineup of Jason "Iggy" Imig on vocals, Dave Steele on bass, Paul Nowoczynski and Stephen Maynard on guitar, and Chris Leonard on drums. The band, its members now spread to the corners of the country, utilized Zoom, and some frequent flier miles to make things happen for their reunion. We talked to frontman Iggy Imig and here's what he had to say.

Nick Warren: For anyone who doesn't know about Abnegation, can you give me an elevator pitch? Why do people love his band so much, even decades later?

Iggy Imig: We were part of a wave of militant vegan straight edge bands. And not only that, I think more importantly, musically we were right on the cusp of when metal — I don't want to call it metalcore — but when metal influenced hardcore and really caught a second wave. We were adding a lot more of a death metal influence to hardcore at a time that wasn't really happening.

NW: And obviously there's a huge difference between metalcore in the mid '90s and metalcore now. [laughs]

II: Definitely, man. We laid a lot of the groundwork for bands that would come after us, using those death metal influences, like Morbid Angel and Neurosis and Meshuggah. I believe that really made a lasting impression. We probably started to get a lot more recognition after we had broken up. I think that's why the idea of doing the reunion show has been pretty well received. The Pittsburgh show sold out pretty rapidly because there's a lot of people that found out about us later on, that never had the chance to see us and now are going to be able to.

NW: What are some of the bands that have cited you as influences?

II: A big one that always keeps on coming back up — and they're playing with us — is Zao. And they have repeatedly put us down as influences. Arkangel, which is a band from Europe. A lot of bands after the fact, like that we probably initially influenced, don't like to say it because we all "sold out." [laughs] But, bands like 7 Angels 7 Plagues or Eighteen Visions, there's a whole run of metal-hardcore that definitely took that — and it wasn't just us, there's Day of Suffering, Racetraitor, and other bands coming out all around the same time using those same influences.

NW: Can you define what it meant to be a militant, straight edge, vegan band?

II: We believed that abstaining from alcohol, drugs, tobacco, as well as meat and any animal byproducts, you know, was the best way to live your life. And that we felt it was necessary to sing about it to put that message out there to get it across to as many people as we possibly could at the time.

NW: And this was a time when people barely even knew the word vegan.

II: Right, and especially when you think of a band like Earth Crisis, who was a huge influence on us? When you think of what they did, and the groundwork they laid, I feel that they're primarily responsible for how big veganism has gotten now.

NW: Are any of you still vegan or straight edge?

II: No, no. A couple of us have had our run-in with alcohol consumption and have been sober for quite some time. I can't say that I'm sober or anything or technically in recovery, but we definitely have reined it in and learned more about moderation. We were a militant vegan straight edge band. We broke up, I went through a really, really bad state of depression, and ended up turning to drugs. I fought a lot of battles with addiction and got to the place where I'm at now — I'm a nurse at a methadone suboxone clinic out here. So dealing with a lot of people in recovery, and trying to get sober and everything.

NW: It's kind of come full circle. Maybe you might "sell out," but some of the fundamentals behind these ideas are things that will stay with you forever.

II: Oh, for sure. I think that's a big part of why I feel good about still singing the songs, even though we may not be vegan or straight edge. It's not like we disagree with those things. And those things are great. For me, man, being in Erie, straight edge and hardcore definitely saved my life, and I was so lucky to have it.

Nick Warren saw Abnegation (post-Iggy) several times at places like IQ Records. He can be reached at nick@eriereader.com