The streets are beginning to talk about the next Mayor's race. It's worth a listen. 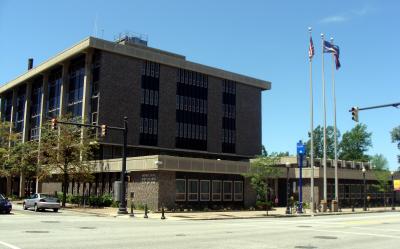 "The streets" are talking and they've got a lot to say about Erie's next mayoral campaign -- in 2017.

Erie Mayor Joe Sinnott is in his third and final term, so he's out, of course. Although I suspect there will be shades of Sinnott across more than one Democratic candidate.

For example let's talk about city councilman Bob Merski, Jr. He's young, he comes from a strong Erie Democratic family, and he's got the potential to be a changemaker. But he also rides shotgun with the mayor on many issues and in a city that has yet to issue it's final report card on the Sinnott era in Erie government, that could be a liability. Many people have suspected that Merski has his toes in the mayoral waters.

This official notice was posted on BobMerski.com in 2013, but that election, and the election year modesty, are behind us. 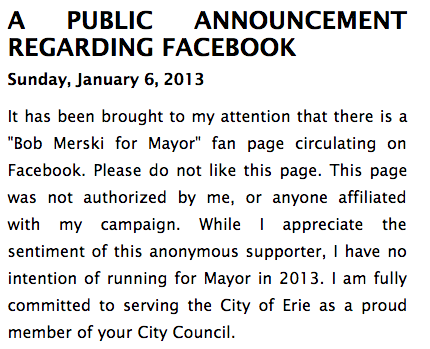 The pictures on his site standing beside Bill Clinton, Barack Obama, and others are strong and, dare I say, mayoral.

If the Democratic primary -- Erie's real mayor's race -- happened tomorrow, Merski's principal challenge would come from fellow city councilman Curtis Jones, Jr. Jones has been a consistent voice on city council and he looks good on camera, but he lacks Merski's East Side charm. Couple that with "personal matters" that may be best left out of a mud-slung Democratic primary and Jones looks like a strong candidate for a less competitive office.

City councilwoman Jessica Horan-Kunco has said that she doesn't want to run, but her rhetoric and the spotlight she created around public art displays doesn't read like someone who's preparing to endorse another candidate. At some point, she will run for mayor. She's clearly enjoyed her taste of power on city council, but 2017 won't be her year for higher office.

Most recently the streets have begun to buzz about a potential candidate from a different wing of City Hall. It seems that Erie Police Chief Randy Bowers may admire the view from the fifth floor more than the one from his office on floor one. Like Merski, Bowers comes from a strong Erie family that could muster some serious capital for his campaign. But the legitimacy of a law-and-order mayor would be the delicate result of a ratio of the average citizen's fear of crime and Bowers's ability to explain why they shouldn't worry. It's not an enviable task.

The streets are whispering the names of others as well. Dave Brennan remains a relative neophyte in local politics even though he's got much to say on a number of topics from his city council seat. Brennan currently resides in that curious space between outsider and serious contender.

To be sure, a lot could happen in the next two and a half years before this thing gets hot. We might even see the emergence of a strong new voice who's not riding a legacy wave and who pays little attention to politics as usual in this Gem City of ours. Anything is possible.

If politics is "better than sex," as Hunter Thompson once wrote, you should hang on tight Reader readers, for this is the beginning of one steamy ride.