John Fetterman, a man for all cities, in push for Lieutenant Governor bid 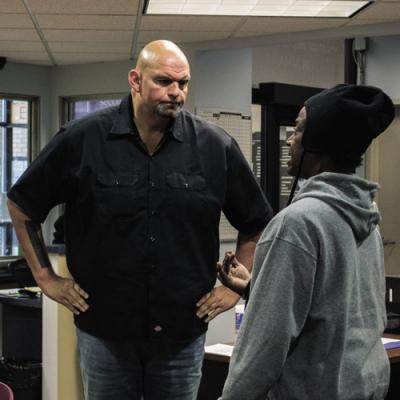 Braddock Mayor John Fetterman — a former U.S. Senate candidate and, more importantly, a nationally-recognized figure for his part in ongoing, progressive efforts to rethink, reclaim, reshape and revitalize one of the Pittsburgh region's poorest (and, in recent years, most innovative) towns — is now vying to win the 2018 Pennsylvania Lieutenant Governor's race.

Following a recent visit to Erie to locally announce his Democratic candidacy for the Lt. Governor's position, Fetterman took some time to catch up with the Reader in a nice little late-night chat.

Ryan Smith: So, tell me, from your perspective, how has the climate, so to speak, changed here in Pennsylvania and across the country over the past couple of years?

John Fetterman: You hate to admit it, but you can't ignore it: Trump is the big news. When I ran for Senate [in 2015], it was the joke. Now, the joke's on us. [And] things feel different on the road. ...It's a critical year for Democrats in Pennsylvania.

RS: So why should folks here in Erie and across the state listen to you — and, ultimately, vote for you for the Lt. Governor's position?

JF: [Pennsylvania's Lt. Governor] has been an under-utilized office … as far as using it to advocate for a lot of progressive [platforms and ideas]. [And, with statewide party control at stake], I'm the strongest candidate to help Gov. Wolf win. That's really my only priority in 2018.

RS: I've said this before — and I mean it as a compliment: You don't come off as any kind of typical politician. So why seek out higher political offices?

"I consider myself a social worker who chose elected office to advance the ideas I believe in."

JF: I take that as a compliment. I consider myself a social worker who chose elected office to advance the ideas I believe in. …[Pennsylvania is full of communities] that deserve to be believed in, second-chance cities that deserve another opportunity to thrive and be reinvested in. ...That's my back-of-the-envelope elevator pitch: these places matter.

RS: And, just assuming you win the Lt. Governor's position, what about your place in — and commitment to — Braddock?

JF: It would never change. I would remain in Braddock as a base, and would commute [for work at the state's capitol and elsewhere]. [And] my commitment to Braddock wouldn't change. ...It's not so much that I would be moving on, but moving up — to help Braddock as well as other [communities across the state].

Now, as before, Fetterman keeps telling prospective voters that it's the real issues facing real people that will continue to be the forces behind his drive toward larger-scale political arenas. For our sake, Mayor — and for the sake of what could be some real, true progress in Pennsylvania — please don't ever let that change.

To learn more about John Fetterman and his run for the position of Lt. Governor of Pennsylvania, visit johnfetterman.com.