This American Song // People of the Stars

by Nick Warren
View ProfileTwitterInstagramRSS Feed
October 21, 2020 at 10:00 AM 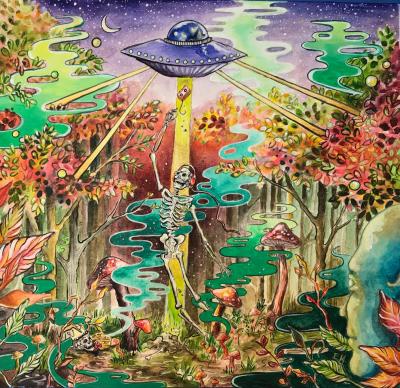 Quite simply, this is one of the best albums to come out of the Erie area in the last five years. This American Song has long subsisted as an underrated spoke of the local music scene — always deserving more recognition than they get, while never outwardly desiring to do anything besides make their own brand of wonderful music. The perfect sonic stew for aging Gen Y hipsters, they're an alt-rock band with a horn section. Diving in deeper, they're somewhere along the continuum between The Hold Steady and Jeff Rosenstock, filled with throwback full-band bombasts and enough personality quirks to keep a therapist's head spinning. In particular, People of the Stars is an achievement as an album. It starts off with the one-two punch of "Young Don't Die" and "Golden Circles," two tracks brimming with hooks. Most of these tracks will be familiar to TAS fans, with some like "Harvest Moon" re-recorded, and live staples like "Easy Way Out" and "Find Your Own Way" getting their time in the sun. Like any good album, it ends in a Pink Floyd-esque spacewalk, with its titular track sandwiched between the radio static of the penultimate Orson Welles sound clip and the opening track. — Nick Warren