This is Your Brain on Guns

Guns and a "living" constitution & some of the weirder responses to the Sandy Hook shooting. 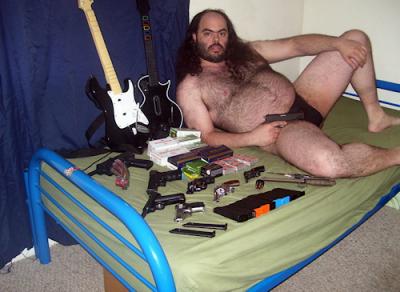 Jeffrey Toobin has a piece up in the online New Yorker on the evolution of the interpretation of the Second Amendment:

Before the nineteen-seventies, the N.R.A. had been devoted mostly to non-political issues, like gun safety. But a coup d'état at the group's annual convention in 1977 brought a group of committed political conservatives to power—as part of the leading edge of the new, more rightward-leaning Republican Party....The new group pushed for a novel interpretation of the Second Amendment, one that gave individuals, not just militias, the right to bear arms. It was an uphill struggle. At first, their views were widely scorned. Chief Justice Warren E. Burger, who was no liberal, mocked the individual-rights theory of the amendment as "a fraud."

Toobin explains how the NRA and some conservative political allies in Congress pushed the new interpretation of the Bill of Rights to where it is today, an individual right to bear arms codified into law by Heller v District of Columbia.

My question is, why? Why are so many Americans invested in that interpretation of the Second Amendment and an individual's right to have a gun? The only answer I can come up with is ridiculous pop psychology: maybe in these times of diminishing middle- and working-class power, guns give the illusion of power. Certainly guns coincide -- even reinforce -- the macho, nationalistic self-image many Americans have of their own country.

Guns just aren't much use to anybody.

I have to say, the conservative reaction to the Sandy Hook Elementary shooting and the clamor for gun control has been as predictable as it is reprehensible. To wit:

Mike Huckabee: "...[W]e have systematically removed God from our schools. Should we be so surprised that schools would become a place of carnage?" James Dobson jumps in on this idea, linking the school shooting to abortion and gay rights.

Representative Louie Gohmert (R-TX) thinks the problem was that the school administration staff wasn't armed: "I wish to God [Sandy Hook principal Dawn Hochsprung] had had an m-4 in her office, locked up so when she heard gunfire, she pulls it out ... and takes him out and takes his head off before he can kill those precious kids..."

The best response -- if, by "best," you mean the one that makes you most likely to want to stab your own eyes out with a fork -- belongs to Tea Partier Timothy Birdnow. "I'm tired of the therapeutic culture that spawns this sort of thing," writes Birdnow.

We have become such a narcissistic culture, a culture devoted to the Church of Materialism, that we cannot accept some sort of transcendent moral order or Natural Law, but continue to place all things into basic animal drives and mechanistic clockwork universe random principles. This was no act of lust, or even of hatred, but a monstrous act of Evil. Until we call it thus we will see more and worse.

It's the fault of public education (because of the "radicals in the classroom"). Teacher's unions. The coddling of black people. (No, seriously.) We should stop reporting these crimes. Restrict sex in television, movies, and the Internet (because, you know, mass murderers' "passions are eternally inflamed"). Criminalize pot. Hire a bunch of George Zimmermans to watch our schools.

My favorite part -- if, by "favorite," you mean the passage most likely to make you throw up in your own mouth -- is this bit of psychoanalysis:

[Adam Lanza] feels powerless because he has lived in an over-bureaucratized society, one run ultimately from a far-away central location. He sees his life as at the mercy of others, and sees himself as having no real input or control. He has been coddled all his life, given free rein to indulge his senses but not to face the responsibilities that freedom necessitates. He was an eternal juvenile, a child who was not allowed to grow up. He lived in a world of the Progressives making, not in reality.

All completely off-the-wall "solutions" to the spree of mass killings we've had. If I see it correctly, these folks envision a kind of authoritarian theocracy full of gun-slingers huddled up in (one presumes) fortified compounds...