The Jefferson Educational Society will host a debate with Chris Reiger, Robert Multari, and Ron DiNicola

by Nick Warren
View ProfileTwitterInstagramRSS Feed
April 11, 2018 at 10:45 AM 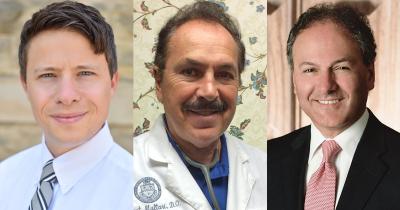 Contributed Photos
Chris Rieger, Robert Multari, and Ron DiNicola (from left to right) are the three Democratic candidates vying to be the nominee for Pennsylvaniau2019s newly drawn 16th Congressional District, which encompasses all of Erie County.

On Thursday, Apr. 26, three candidates vying for one of our region's most powerful seats will participate in a debate at the Jefferson Educational Society. Three challengers will be on the ballot for this year's May 15 general primary. For registered Democrats in Erie County, the names to watch will be Chris Rieger of Butler County, Dr. Robert Multari of Farrell, and Erie's Ron DiNicola (Brian Skibo, of Hermitage was campaigning in early 2018, but has dropped out of the race and now ardently supports DiNicola).

"Of course we expect a civil debate on the issues, but we also anticipate the candidates delving deeper into their platforms and illustrating contrasts between themselves and their opponents," said Caitlin Handerhan Executive Director of the Penn State Behrend Public Policy Fund, who will serve as one of the moderators of the debate. "In a primary, it is important that candidates stand out and give voters a clear sense of who they are and why they are the best (in this case) Democrat for the job."

Getting to this point, however, has been a virtual roller coaster.

"This is the first time since redistricting in 2010 that Northwestern Pennsylvania is united in a single congressional district; the courts ruled that the previous map was gerrymandered, and in the case of Erie County, made the district virtually unwinnable for Democrats," explained Handerhan. "The new map, approved by the State Supreme Court, still gives a registration advantage to the Republicans, but now the district is more competitive for Democrats."

That competitive nudge comes at a pivotal time. It's midterm season, and to most politicos, the nationwide results of this year's election will act as a reflection of the recently elected presidential administration. This is where the pushback is most evident, and over the past century, this trend has favored the party out of power (aside from situations like the 2002 post-9/11 elections). For Democrats, this could signal another sea change. "Many see this as a viable, winnable race for the Democrats, which makes this primary very important," said Handerhan.

The event, sponsored in part by Behrend's Public Policy Fund, will be moderated by Handerhan as well as Ben Speggen, program director at the Jefferson Educational Society (and Erie Reader contributing editor). each candidate will give an opening and closing statement and the chance to answer questions that we have prepared, in addition to audience questions that can be submitted in writing at the debate." Check out a livestream of the debate on the Erie Reader's facebook page.