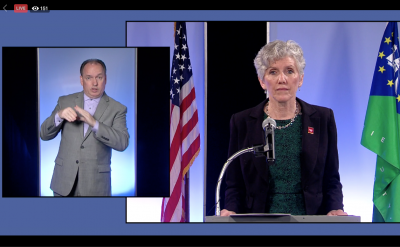 PA Secretary of Health, Dr. Rachel Levine addressed the Commonwealth today, noting that because of high winds, Governor Tom Wolf could not join remotely. Levine reported that yesterday saw 1,989 new cases of COVID-19, bringing the statewide total to 18,228 positive cases, now present in all 67 counties in the state. Approximately 850 of these cases are in healthcare workers, and 168 are present in long-term care facilities. There have been 338 deaths, all in adults.

Hospitals reported 2,033 patients that are currently hospitalized (11% of the case count), while 600 require ventilators or breathing machines.

Erie County Executive Kathy Dahlkemper began her address, citing that there were three new positive cases of COVID-19 in Erie County, bringing the total number to 35. There have been 810 total negative cases. Two of the latest patients are in their 50s, while one is in their 60s. All three of these cases have been linked to direct contact with previous cases, implying a lack of community spread in these specific patients.

Not included in these cases is one of a Wabtec employee – who does not reside in Erie County, who tested positive. Dahlkemper reported that the employee in question has not been back to work since March 26 (two weeks from the time of this writing), and the building they had been working at has been temporarily closed down, undergoing a deep cleaning.

There remains one confirmed case in Warren County, with 13 in Crawford County. Pittsburgh's Allegheny County has had 759 cases, with 12 deaths.

Dahlkemper offered up a new resource from the county, a map with the latest cumulative case numbers at eriecountypa.gov.

Dr. Wayne Jones Medical Director of Emergency Medicine from Allegheny Health Network at St. Vincent joined by phone, providing updates on the hospital's attempts to increase capacity for approaching needs. Jones also clarified a previous answer he gave in his April 2 appearance (wherein the other three guests also joined), reassuring the effective safety procedures in place for emergency room visitors and other guests.

Emily Shears, Director of Infection Prevention at UPMC Hamot, joined via video, mentioning a recent press conference in Pittsburgh where officials told that Pennsylvanians were effectively flattening the curve to some extent [viewable below].

After some technical difficulties, Monsignor David Rubino, Ph.D., Vice President of External Affairs at LECOM Health joined via video, reminding residents to eat normally and exercise in an attempt to reduce stress.

Rubino and Sommers confirmed that they have no patients who have tested positive at their facilities.