Wondering what to do? The first thing you have to do is read Alex Bieler's To Do List! 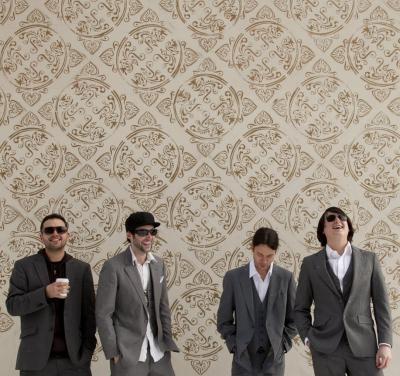 Ever since the days of our youth when our teachers would call on us to verbally arrange letters in a proper order, we've been told that spelling is important. For every "SHCOOL" sign or that one time that an honorary cake to former Atlanta Braves manager Bobby Cox spelled his last name, well, differently, there are occasions where an adjustment in letters can make for a big improvement.

Take "Gymkata," for example. With this spelling, we end up with a 1985 movie featuring U.S. Olympic gymnast Kurt Thomas that has developed a cult following as an unintentional comedy. Now, if you swap out the first three letters to create Jimkata, you've got yourself the better half of a homophone, my friend.

After basing the band's name off of the MGM flop, the members of Jimkata, an Ithaca, N.Y.-based quartet, started to make the rounds, eventually coming to The Gem City for the first time just over a year ago. It didn't take long for the city to endear itself to the foursome.

"It's already become a regular stop for us," says Evan Friedell, lead vocalist and guitarist for Jimkata. "We always have a good time. The crooked i is one of my favorite venues to play because it's one of those places where it's pretty clear the owner actually cares about what is going on."

After what Friedell called a "monstrous year" of touring in 2012, Jimkata is back on the road again this year, stopping in town for a 10 p.m. show at the crooked i with special guest Ocupanther Friday, Feb. 1.

Along with the new show in a new year, Jimkata will be bringing some of the band's newest material off of their latest album, "Die Digital," as well.

"It's my favorite record so far and not just because it's our newest one," Friedell says. "I really think it's the best thing we've put out. It kind of feels like it was something that helped us move in a new direction or at least more toward what our true sound is."

According to Friedell, "Die Digital," the group's third album, was a natural progression for a hook-loving band with an electronic obsession. Of course, the new album may push farther into the realm of synthesizers, but the members of Jimkata balance the two worlds nicely.

"At our core, we're most concerned with good songwriting. I love a good song that has all the basics: a good hook and lyrics you can remember and take home with you. On the other hand, we're influenced by electronic music and hip-hop music, things where there's heavy beats. We try to root it in the core, natural elements of what makes it a good song."

No matter how you spell it out, Jimkata will get the party started when they come to town.

Growing up, there are certain moments that stick with you into adulthood. While even the smallest of memories can persistently pop up in one's mind, sometimes there are events so big that they have consequences years later.

This kind of traumatic event lies at the center of "Blackbird," a one-act play presented by Laugh/Riot Performing Company down in Edinboro. The show, which opens at 7:30 p.m. Thursday, Jan. 24 at the Diebold Performing Arts Center at Edinboro University of Pennsylvania, is based around a young woman confronting the man who sexually abused her when she was younger. Instead of centering around the event itself, however, "Blackbird" studies the effects on both parties years later.

"The show focuses not so much on the act of abuse when she was 12 years old, but it's seeing what her life and her abuser's life is like, what they have done since the abuse and how it is affecting them," says Audrey Schweitzer, who directs the play, as she speaks of Una. "Years later, it's still definitely a part of her life."

With a small cast consisting of Jenn Highfill, Jerry Brace, and Sabrina Trudnowski, "Blackbird" keeps the focus on its principle characters, keeping the audience sucked in during the duration of the show.

"What I'm hoping for is that at the end of the play, the audience sits there and just goes 'Whoa,'" Schweitzer says. "It's a very, very intense play. The way the dialogue is written, it's a lot of disjointed, abrupt, mature language. The story itself is what the people are interested in and going to keep paying attention to."

by Matt Swanseger12 hours ago
Do you?