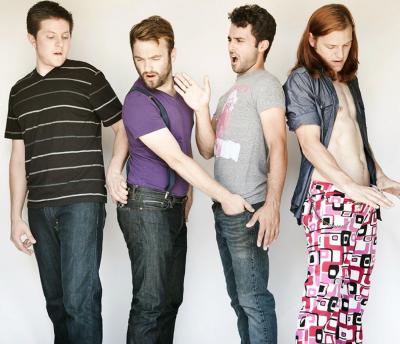 Just over a month ago, the Erie Reader crew and a pair of MoreFrames animators went on an adventure to a land just two hours away. For those of you that enjoy our fine paper, you may have even read Managing Editor Ben Speggen's piece on their trip a couple of issues back, in which they were introduced to some of Buffalo's fine establishments, art, a show featuring Erie's own Falling Hollywood and Buffalo's The Albrights, and, most importantly, late-night steak sandwiches.

Now you may be asking yourself, "Alex, why are you bringing up something that happened in the past when we've come to the To-do List for advice on what to go to in the future?" Don't worry, my lovelies; Uncle Alex normally has a point. You see, Mr. Speggen's piece, titled "To Buffalo and Back Again," is about to come full circle, for Falling Hollywood and The Albrights are ready to team up again – except this time they'll be in Erie.

That's right, the two bands will be playing at the crooked i at 10 p.m. Saturday, Jan. 12. By now we hope that you're familiar with Falling Hollywood, one of the local favorites whose album "Set the Table" made it onto the Erie Reader's Top 10 Albums of the Year and was the Reader's local album of the year. The Albrights, however, might not be as familiar to you as the hometown Hollywood, but that should change soon.

The quartet, which has played with bands like Everclear, Eve 6, and Fountains of Wayne, has been a Buffalo staple over the past few years, sealing their status in the city with their blend of rock, blues, power-pop, with dashes of ragtime, and more. When it came to how the band developed its signature sound, bassist Matt Crane attributed it to a melting pot of individual influences.

"We all offer our musical backgrounds to our instruments," Crane said. "I play like the music that I listened to, the other guys play come from what they grew up to. Instead of fighting that and saying that we have to start sounding like this kind of a band, we just sort of play and let it happen organically."

These influences can be heard on The Albrights' 2011 album "Ask, Tell," in which the band effortlessly switches between styles. And now that drummer Dustin Herzberger has solidified the lineup, Crane and company have been working on material for a new album, some of which will be played for the crooked i crowd.

As for the band's Erie playing partners, Crane said he was impressed with the young group and that they were a testament to the amount of musical ability the two rust belt cities contain within their borders.

"There's a ton of talent and great bands in Buffalo and I'm sure there are in Erie, too," Crane said. "Since they're so close, it makes sense to develop a relationship like that and spark some interest, get things moving between the two cities."

With a dash of Erie and a sprinkle of Buffalo, this show has the ingredients to make for an I-90 celebration.

At L'Arche, community is a big deal. The faith-based group, dedicated to building relationships between people with and without intellectual disabilities for the past 40 years, is always welcoming others to its celebrations, and the L'Asagna Tasting is no exception.

The L'Asagna Tasting, presented by L'Arche Erie, will feature 11 different restaurants, including La Bella and Alto Cucina, offering up their signature lasagnas to be judged by both a panel of judges and the public from 1 to 5 p.m. Sunday, Jan. 13 at the Concourse of Union Station.

"We thought that this might be a good way to have a fundraiser and a friendraiser – that's a dual goal for this event," said Patty Sperry, member of L'Arche Erie's Board of Directors. "We're giving people a taste of lasagna and a taste of L'Arche."

As part of a year of activities to celebrate L'Arche's fortieth year in Erie, Sperry said the idea of the L'Asagna Tasting came from some family dinners.

"We were talking and reminiscing and someone mentioned that one our former board presidents, Sue Stroh, would visit the various homes," Sperry said. "There are always community celebrations going on for people's birthdays and holidays and picnics – just getting people together. Whenever she went, they were always serving lasagna, so they were laughing at this meeting saying how she was convinced that the 'L' in L'Arche stood for 'lasagna.'"

In addition to all of the lasagna that will be available, the event will have live music, caricatures by artist Chris Schroeder, and auctions for various prizes. A cash bar and complimentary cookies and coffee will also be available. Tickets for the L'Asagna Tasting are $13 if bought before the event and $15 at the door. Chances to win auction items can also be bought online at larcheerie.org before the event.