Will and the Won'ts rock PACA and Erie Ale House, and 24 Hour Comics Day comes to Box of Light Studios.

by Alex Bieler
View ProfileFacebookTwitterInstagramGoogle+RSS Feed
October 16, 2013 at 9:26 AM 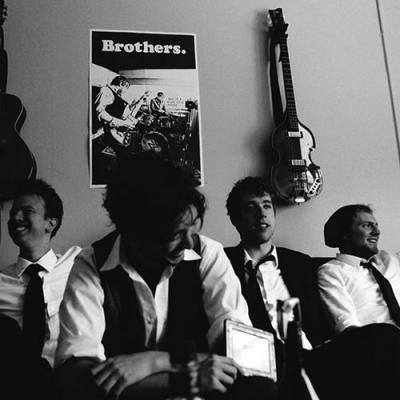 Will and the Won'ts

Whether you love it or hate it, a hometown makes a big impact on a person. The proverbial apple can fall where it wants, but the experiences a person has in their youth can plant a seed that helps grow into anything from a fond memory to a passion that can even spawn a career.

For Will Risbourg of folk-rock band Will and the Won'ts, Santa Fe, N.M. helped push him into a songwriting, guitar-strumming adult.

"I've always been influenced by roots music, folk, country, and rock 'n' roll," Risbourg said. "In Santa Fe, there's a big alt-country scene and a lot of folk music. My dad is kind of an amateur folk music scholar, so through that knowledge I learned a lot about how music evolved and where it came from."

Now Risbourg channels the lessons of his hometown and his father for Will and the Won'ts. The four-person band will play two shows in The Flagship City as part of their current tour, one Wednesday, Oct. 23 at PACA and the other Saturday, Oct. 26 at the Erie Ale House, and Risbourg hopes to bring a Santa Fe feel to the venues.

"There's a lot of natural spectacles, and growing up around that seeps into you," Risbourg said. "You come to appreciate that. If anything, it's just a less artificial atmosphere. I try to keep that as a theme in our music."

Even better, Will and the Won'ts will be celebrating a bit of a homecoming in Erie, as drummer Andrew Bilotti was raised in The Gem City before heading to Los Angeles for music school, where he met Risbourg and eventually joined the folky foursome.

Soon the Won'ts will bring the sounds of two hometowns to two venues, providing you with multiple opportunities to not only welcome someone back home, but to hear the inspirations of another out west.

Sometimes it feels good to get down and nerdy.

While nerds and geeks used to be slotted near the bottom of the social totem pole, the culture has experienced a big turnaround in public image over the past decade, with self-proclaimed nerds and geeks running companies and setting trends. Even professional athletes have been embracing the culture, attempting (not always successfully) to dress the part in post-game interviews with fake glasses and bow ties in an attempt to seem more academic.

In a day and age where there are popular podcasts like "The Nerdist," as well as the fact that podcasts, like our very own The Erie Listener, are deemed as cool, it's okay to give in to your inner geek and your nerd doppelganger. Now all you need is an outlet to help you explore your creative side. If only there was a day devoted to such an activity.

Oh wait, there is, and it's, as the cool kids would say, pretty neat-o. It's called 24 Hour Comics Day, a free annual event that challenges people to create a 24-page comic book over the course of 24 hours. Of course, it helps if a local group were to host such a test of will and creativity, so The GeekERIE decided to help Erieites out by inviting them to participate from 11 a.m. Saturday, Oct. 19 to 11 a.m. the next day at Box of Light Studio.

"I wanted to do this because I did it when I lived in Austin, [Texas] and I finished 11 pages in the 24-hour period, which, considering I'm way behind on my drawing skills, isn't that bad, but I got a good story out of it," GeekERIE founder Sean McGrath explained. After his experience with 24 Hour Comics Day, McGrath wanted to bring that event, as well as other fun geek and nerd-friendly events to Erie, so The GeekERIE was created,  with Comics Day acting as a proper kickoff for their events.

Now you may be worried about taking on a 24-hour challenge all by yourself. Yes, in the strictest sense, participants are supposed to complete the whole comic book alone, but the point is to have fun.

"A lot of people do variations on it," McGrath said. "We had a husband-and-wife team come last year, and that was pretty cool. Everyone else worked individually. We had a mother bring two of her kids, and they just hung around for a couple of hours and drew and talked to the guys. As long as someone produces something, I want them to see it published."

Oh yeah, that's another bonus; your work will be published and presented to those who donated through the event's Kickstarter. It's just another perk for hopping on the geekmobile.

So, are you geek enough to take on the challenge? If you are, shoot an email to stseanoftheknife@gmail.com and reserve a spot to show just how down and nerdy you can get.

will and the wontspacaerie ale house24 hour comic daygeekeriesean mcgrath