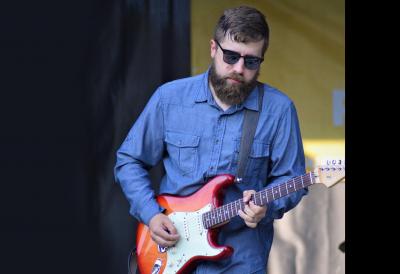 Kori Hahn
Tony Kellogg, who has enjoyed success locally with his band TK Blues Co. and as a solo artist, committed himself to a 365-day songwriting challenge on Oct. 8, 2018. So far he has made good on his personal pact, fastidiously documenting his progress on YouTube and Facebook.

In October of 2018, Tony Kellogg, local songwriter and bandleader of the TK Blues Company, embarked on an ambitious journey. He decided to write, record, and post one original song every day for an entire year. Fans are able to check out his progress online on Facebook (also making his videos available on YouTube). On Tuesday, Oct. 8, he'll circle around, completing his mammoth undertaking. We checked in to see how things were going in the last days of his project.

Nick Warren: What inspired you to take this on?

Tony Kellogg: A few years ago when I saw Zack Orr do his 365 Days of Song, I thought it was pretty damn cool. I watched a lot of those episodes and was really blown away that he was able to pull it off. I was on vacation last year on my birthday and thought, "Hell, I've got a bunch of original material, I'll try the same 365 thing, but with my own songs!" I'd seen that there had been a real downtick in original music in this town and I thought I could maybe add this project to the public eye to show that original music is still happening around here, despite how much it seems that cover bands have taken over.

NW: How do you think you've grown as a songwriter over the course of the year?

TK: As for the inspiration, it's funny to look back at like, day 30 and I'm saying, "Oh, I'll write a new song every ten days for this project." But by day 80 I realized that I had nowhere near the amount of material that I thought I had, and around mid-February, I started writing a new song every day, save for a few days where I relied on old material.

NW: What track do you usually point people to listen to first? Or do you prefer that they go chronologically?

TK: I don't really point anyone to a specific song. The way that Facebook posts them, they just end up being chronological. I have a playlist set up on YouTube in chronological order, at least the first 80 songs or so.

NW: Every musician has a few go-to phrases or changes or vocal patterns or lyrical themes. What items in your tool kit did you find yourself going back to, and what new tricks did you learn?

TK: I definitely have a bunch of tricks I stick with; most notably a diagram of chord changes and theory that I found in a library book at Blasco back in 2003 when I first started really writing a lot. I have tried really hard to write blues songs that aren't the typical 12-bar, but accessible enough that it doesn't trick your brain too much to listen to them. I want them to be interesting but not a challenge to enjoy.

NW: Are you going to try to make an album out of these new songs? Or have them exist as they are?

TK: As of now, I do have some plans to make a follow up to my 2015 album Don't Give Up On Love, and I'm also planning an album with TK Blues Company, which plays a good chunk of tunes that I've written in the past year, like "The Soul In Erie," "Rose," "I Like The Way," and "I Didn't Know Down." I intend on using the songs for projects going forward, definitely. I am really pleased with the whole project, but there are definitely at least 75 of them that I really love.

You can find Tony at facebook.com/tonykelloggmusician, and on YouTube at youtube.com/user/TonyKellogg, or playing out solo or with this band TK Blues Company. Upcoming dates: Saturday, Sept. 28 solo at the Tipsy Bean — 7 p.m. Saturday, Oct. 5 solo at the Venango County General Store — 6 p.m. Saturday, Oct. 12 solo at Riverside Brewing Company — 7 p.m.